One team will have a chance at making history while another gets a shot at redemption when the OFC Men's Olympic Qualifying football final takes place on Saturday.

Hot favourites New Zealand will take on Solomon Islands for a place at the 2020 Tokyo Olympics. 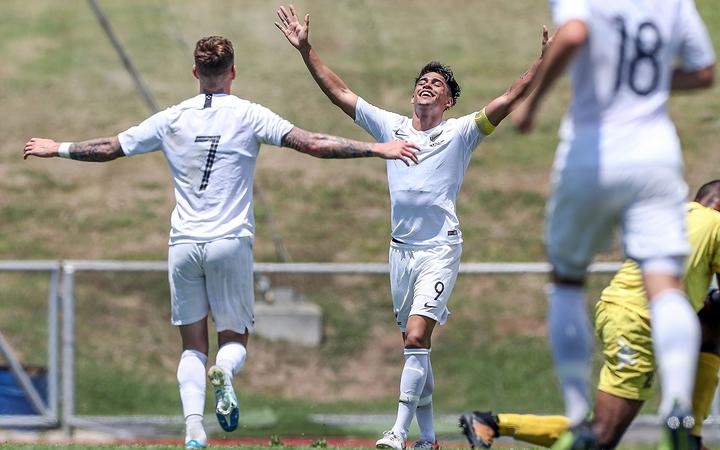 The two sides made the final courtesy of victories over Fiji and Vanuatu respectively.

A Solomon Islands football team has never made an Olympics while four years ago Fiji made their Olympic debut, after New Zealand was disqualified from the OFC Qualifiers for fielding an ineligible player.

However this time around New Zealand ended Fiji's dream of making their second consecutive Olympics, thumping them 6-1, after racing to a 3-0 lead after half an hour.

Despite hot and humid conditions at Lautoka's Churchill Park, the New Zealanders took complete control of the game keeping the home side scoreless until a 73rd minute goal from replacement Mohammed Shah.

Full international Liberato Cacace and captain Logan Rogerson impressed early on, and it was Rogerson who created his side's opening goal by sending the ball into the box before Fiji defender Scott Mara deflected it into the net.

Rogerson scored himself after a Ben Waine goal, before Myer Bevan completed the scoring for the first half.

Fiji started the second half strongly with skipper Kishan Sami and Bruce Hughes both making stirring efforts and Scott Wara and Joeli Ranuti not capitalising on chances.

New Zealand benchman Callan Elliot and Bevan concluded the game's scoring with the latter finishing with a brace to take his tournament tally to 10 goals.

Fiji finished the game with 10 men after Akeimi Ralulu was sent from the field for a second yellow card.

"It was tough, 32 degrees with a 12 o'clock kick off, very trying but full credit to our playing group, for them for what they did, especially in the first half we they have done enough," he said.

"The second half was a little bit scrappy, but we have done enough in the first half, and for them to continue working in this kind of heat and this kind of humidity was a real win for us, and it's important now for us to recover for the final," said Buckingham.

He said the team would spend the next couple of days looking at areas to improve on but there was nothing big.

"Our focus was always on arriving in the final, and scoring goals and they have done that with 28 goals in four games.

"We also wanted to play well and we have shown that over the four games, we got better and we just want to arrive in the final better again," Buckingham added.

"The gap remains between us and New Zealand and we need to patch this gap in the near future, but the work that has been done by New Zealand is marvellous," he said.

Melanesian rivals Vanuatu and Solomon Islands met in the second of day's semi-finals, and kicked off in expected fashion with some fast-paced action. 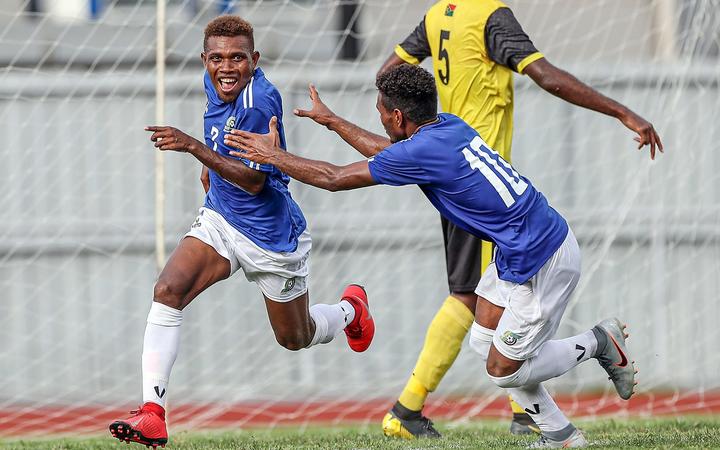 Vanuatu looked likely early on with a number of darting runs down the flank by Bethuel Ollie and positive play from Ronaldo Wilkins.

However the Solomons started to make their way back into the match with an Augustine Waita chance going over the crossbar .

Both teams went back and forth before a Frank Kabui pass to set up Waita to score in the 37th minute.

Vanuatu's task got tougher when Tasso Jeffrey was shown a straight red card in the second half for a dangerous tackle.

Vanuatu continued to battle on gallantly despite the deficit in score and manpower, coming close to levelling the score before the final whistle put paid to their campaign.

Solomon Islands now meet New Zealand on Saturday in a replay of their Group A encounter from last week in which the latter come through with a 4-2 win.

Solomons coach Batram Suri said while he was happy with the result there was still a lot to do.

He admitted Jeffrey's red card helped his side.

"Yes it was crucial, but I thought despite the red card we had to play our own style, and they pushed us and it felt like we played against 11 players, but yes it was crucial for us," Suri said.

"It's hard to explain, we came into this match wanting to win it but we didn't manage to do it, but it's life we couldn't come back," he said.

"But I want to congratulate the boys, they played really well, they played good football today, and we managed to play with ten men and still managed to have ball possession and managed to put the Solomons under pressure." 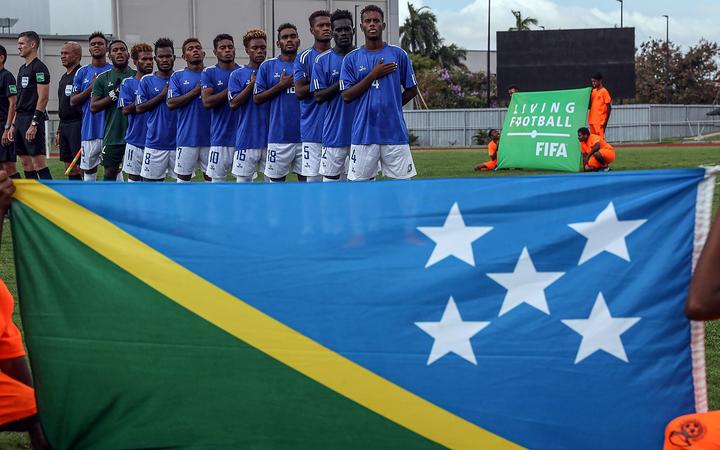 Solomon players sing the anthem before their match against Vanuatu Photo: OFC via phototek / Shane Wenzlick