A muslim leader in Fiji says his community is not afraid despite a memo from Fiji's Muslim League urging members to take appropriate security measures over the next few days. 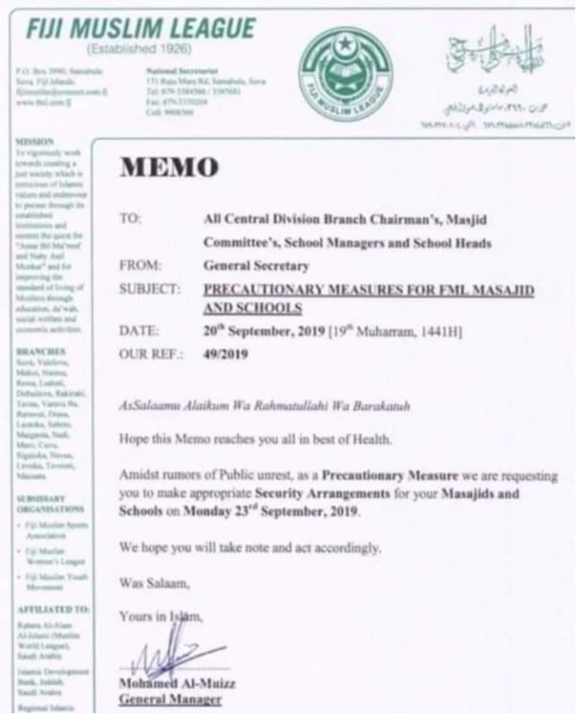 A weekend advisory said members of the community should take necessary precautions as rumours of civil unrest became rife.

It also urged its schools and places of worship to make appropriate arrangements.

But president of the Masjid Ul-Halil Mosque in Lautoka, Abu-Bakr Sadiq Koya, said the community had confidence Fiji's security forces would keep them safe.

He said Muslims in the country would continue to go about their lives as normal.

"Everybody's talking about that something will happen. People are talking about it but I know it is bulls**t because nobody can do anything with the security," Mr Sadiq Koya said.

"The Fiji government, the military and the police are very strong here in Fiji. It is not so easy for anybody to take any action here."

League president Hafiz-Ud-Din said a mosque and shops in the town of Nausori, outside the capital Suva, were vandalised on Thursday.

He said after the Christchurch terror attacks the league did not want to take any chances, so the memo was sent out.

Public reassured of safety amid rumours of civil unrest

Meanwhile, Fiji's security forces have moved to reassure the community that the rumours of civil unrest are unfounded. 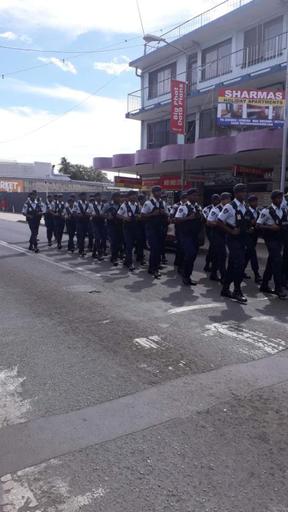 Over the weekend about 50 police officers marched through the main streets of Lautoka.

The Deputy Secretary for the Ministry of Defence and National Security, Ilai Moceica, denied the march had anything to do with the rumours of civil disturbances.

"There's nothing happening that people should be afraid of," he said.

"And we can confirm that everything's normal from the Ministry of Defense and National Security."

Mr Moceica said he was unaware of who was behind the rumours.

Earlier, Police told local media the Lautoka march was part of an "operational readiness check" the force was undergoing across the country.

The police march was accompanied by motorcycles and patrol vehicles.

The military said it was working alongside police to ensure the nation's security and safety.