Marshall Islands president Hilda Heine has become the first female Chancellor of the University of the South Pacific (USP). 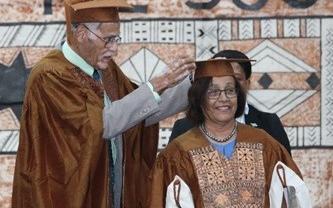 Hilda Heine is installed as the Chancellor of USP by Winston Thompson, Pro-Chancellor and Chair of Council. Photo: USP

She was installed as the university's 26th chancellor at a ceremony in Fiji's capital Suva.

Appointed to the role for a one-year term, President Heine succeeds the outgoing Chancellor, Taneti Maamau, the President of Kiribati.

The chancellor is appointed from USP's 12 member countries in alphabetical rotation.

Paying tribute to USP's accomplishments, President Heine said there was still much work to do to forge solutions to climate change.

She challenged the USP to consider the establishment of an Atoll Centre of Excellence to catalyse research, policy and strategies to safeguard island states most vulnerable to the climate crisis.