Fiji has recorded 1894 dengue cases in the first four months of this year, but officials say a project now underway will reduce numbers in future years.

Last year, nine people in Fiji died from dengue and there were 4000 cases officially recorded.

The World Mosquito Program has this week released wolbachia mosquitoes in Nadi, Lautoka and Nausori as part of phase two of a project to block the insects from transmitting the disease. 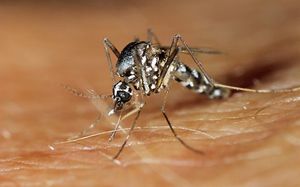 An official with the program, Eremasi Seru, said the first phase had involved releases in the capital Suva and surrounding areas including Nakasi, Cunningham, Tamavua, Tacirua and Kinoya since July last year.

"This is the Pacific Islands. We are infested with mosquitoes. So the wolbachia method is a positive method to counter this. We will not kill all the mosquitoes but this is a really positive way to reduce dengue fever by just injecting them (mosquitoes) with the Wolbachia (bacteria)," Mr Seru said.

Discussions are underway for wolbachia infected mosquitoes to be released in Sigatoka, Ba and Nausori, he said.

Wolbachia is a naturally-occurring bacteria in 60 percent of insect species such as butterflies and moths, which blocks the transmission of the dengue virus.

The Health Ministry said in a statement it was encouraging to see the increasing levels of mosquitoes carrying the dengue-preventing Wolbachia bacteria.

World Mosquito Program co-ordinator Aminiasi Tavui said it would take time for the wolbachia to fully establish in the local mosquito population.

But he said he was confident there would be a reduction in dengue fever cases in the long-term.