Pacific countries with Rugby Unions still struggling to develop the sport could benefit from a renewed approach by Oceania Rugby to hold more regular tournaments.

The first annual edition of the Tier 3 Oceania Rugby Cup kicks of in Port Moresby this Friday. 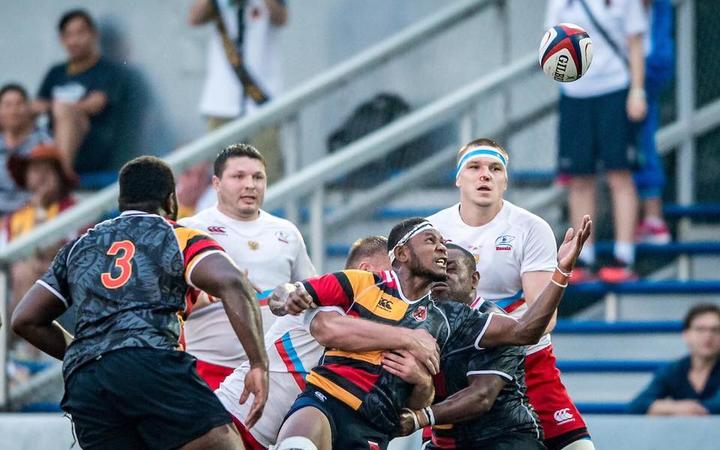 "We meet regularly with these member unions and have a lot of dialogue in terms of their needs," Mr Schuster said.

"There has been a very prevalent need by these unions to have more access or exposure to international 15s.

"No point having one hit wonder competitions and then having it dormant. We need to look at sustainability and getting these tournaments up and running on an annual basis," he said.

The opening match of the Oceania Rugby Cup will see Solomon Islands taking on Niue at 1pm local time on Friday at the Papua New Guinea Football Stadium in Port Moresby followed at 3pm by PNG taking on Nauru, who are making their international debut in the 15 a side format.

The Nauru Rugby team pose with their new kit at the Nauru Consulate office in Brisbane en route to the Oceania Rugby Cup in Port Moresby. Photo: Nauru Rugby

The cup is being played in round robin format with the team accruing the most competition points to be declared the winner.

Looking to the future even before this year's edition kicks off, Mr Schuster said there was already the prospect of the Cook Islands, New Caledonia and Vanuatu taking park next year.

"So I think with this tournament we hope that it becomes a catalyst to reinvigorate Tier 3 rugby," he said.

Having the competition based in Port Moresby is a strategic move by Oceania Rugby given it is the largest Pacific Island nation where there is potential to find a long term sponsor for the tournament, Mr Schuster said.