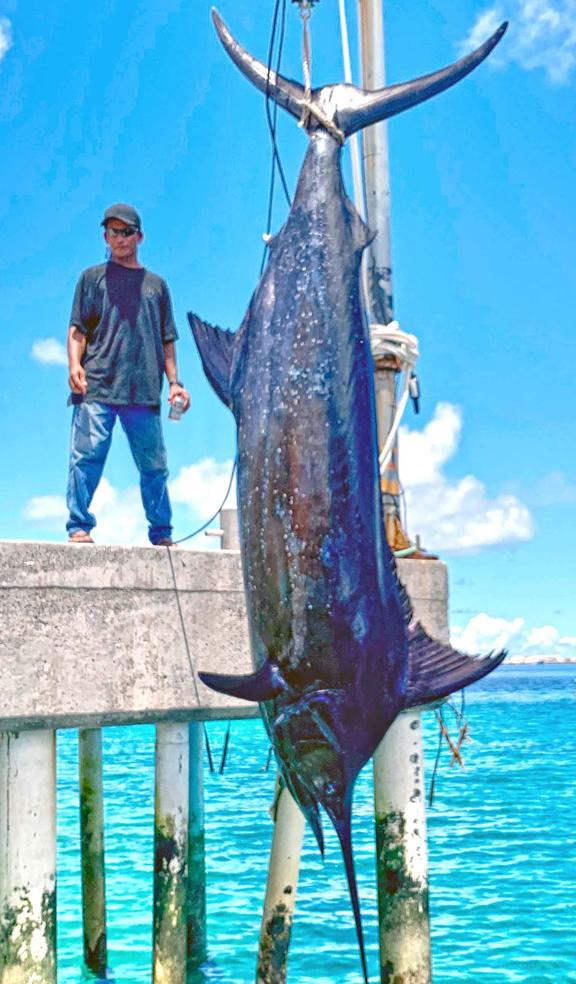 Marshall Islands angler Bwiji Aliven stands on the dock next to his mammoth marlin catch, which weighed in at 429kg. Photo: Supplied/ Kyle Aliven

The award-winning local angler caught what is believed to be the biggest marlin ever brought in in the Marshall Islands by a local fisherman.

His younger brother, Kyle Aliven, owns the Marshalls Billfish Club tournament record, set in 2001: 326kgs. But Bwiji's 429kg fish is in a class by itself.

On top of catching this massive marlin, Bwiji managed the massive catch during a solo fishing trip - he was captain, crew and fisherman all in one.

"It's the biggest ever caught by an angler here, or in the Micronesia area."

Hernandez was on hand at the Robert Reimers Enterprises Shoreline Dock to handle the weigh-in and confirm the weight of the marlin.

In Majuro, there are no known catches prior to this that have been bigger than Kyle's 326kg fish caught during the July 2001 annual MBC Fisherman's Day tournament.

Over 20 years ago, Ronnie Reimers hauled in a 302kg fish on a non-tournament fishing trip.

Bwiji is one of the Marshall Islands' top anglers, having won the Marshalls Billfish Club's President's Cup seven times since 1994.

The President's Cup recognizes consistent fishing through most points accumulated based on kilograms of qualifying fish weighed in over the 10-12 tournaments the club runs annually.

A "big" marlin in the Marshall Islands has usually been defined as one in the 226-272kg range. Bwiji's behemoth catch redefines what's possible for anglers fishing in Marshall Islands waters to aim for.

Thanks to Bwiji, the next big catch needs to break 453kg to be in the conversation.