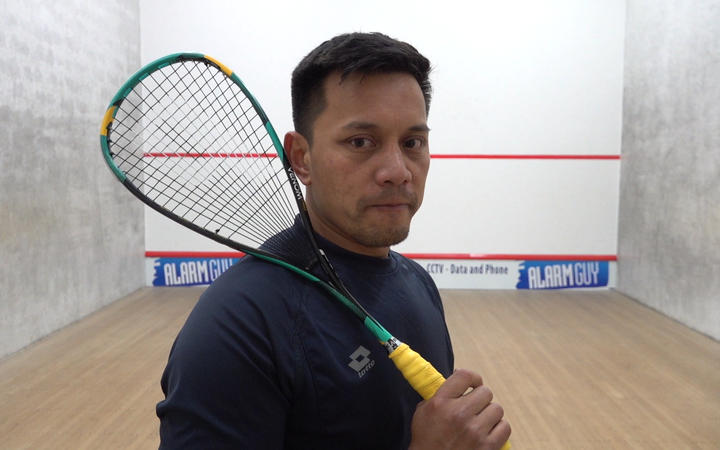 The 16th edition of the Pacific Games will be officially opened in Apia this weekend, with about 3,500 athletes from across the region expected to compete in 26 sports over the next fortnight.

Onesemo Old will represent Samoa in squash at the Pacific Games in Samoa.

Onesemo or Semo as he is known to his friends and a family is an experienced squash player, having played the game competitively for about 15 years.

He told Alice Lolohea that his introduction to the game goes back to his secondary school years in Samoa.

"My teacher was running around trying to get people to go and play in this game of squash and he said, if you want to play, meet me at so and so place. It was really good and different, picking up the racquet and whacking it. It felt like you're just getting your frustration out on something. So it felt really good," he said.

Alice Lolohea: This is not to say that rugby wasn't on the card for Semo as he did try to make the schools first 15 team back in Samoa.

"I was told I was too small. I still carry that with me. When I came here and went to school in New Zealand, I went and had a look at the calibre or the profile of kids who were playing rugby. You look at them, they were like very tall. So I was like revert back to that memory and was like , I'm too small, I'm not going to play that sport now," Semo said.

Alice Lolohea: Now as a well-established squash player in New Zealand, Semo had to overcome personal barriers such as language and his shy nature to be where he is today with the sport.

"Over the years your starting to come to reality where these are the people that's playing your sport, you going to have to socialise with or mingle with them, which helped me to socialise with people, and to get to know other people from other clubs. When you do meet up again you know you have friend. I feel like I know everyone in New Zealand who plays squash at my level because of the amount of years I've been playing, and I'm always playing tournaments , so you see the same faces every time you play," he said.

Alice Lolohea: Semo represented Samoa for the first time in 2007 in the Pacific Games that year in Samoa.

Alice Lolohea: On top of the club competitions, Semo has also competed in tournaments around New Zealand which is why he is amongst the top players in the country.

"We do have an Auckland competition that all the clubs participate in. So you bring your best team in and from each club and battle it out and see who wins it. That is the national which is called the Carston shield. And then then there is also another competition, where it just your own grade and squash is classed as a expensive sport. Basically you gotta buy everything , shoes, your racquet, bags, you don't get sponsored by anything like. Unless you're umm you're a kid yourself your parents will pay for all that. But it can be a very expensive sport. And then in tournaments you gotta pay a fee for any tournament that you play. That also cost money as well," Semo Old said.

Alice Lolohea: This may have been one reason why very few Pacific Islanders play the sport in New Zealand however, Semo believes that squash organisations in Samoa should organise more tournaments; if they wish to improve the standard of the sport there.

"So all they got is each other to play against. So for me here, I've got a variety of you know good people or higher or lower that I can sort of play against. Obviously its easier for me to improve here than the rest of the guys in Samoa."

Alice Lolohea: As one of the most experienced player in the team this year, he is going into the games with some level of confidence.

"So I suppose for me now I know what to expect, and obviously its up to me, the preparation is up to me so if I wanna get further in the competition and and try to win a medal. So but obviously it's a dream but yes im doing a lot of training, " he said.