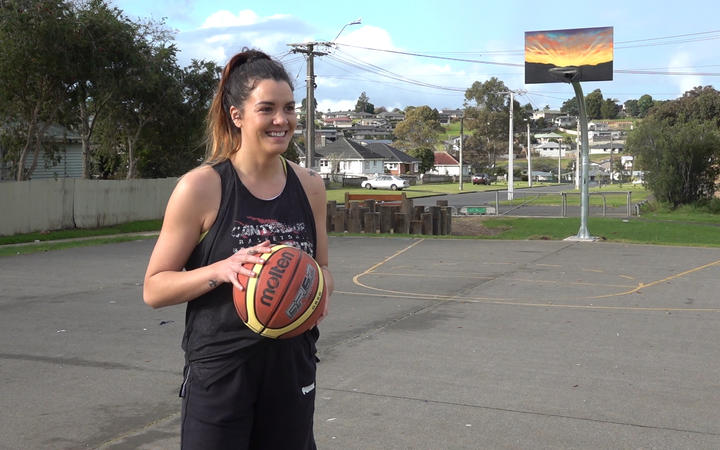 The 16th edition of the Pacific Games will be officially opened in Apia this weekend, with about 3,500 athletes from across the region expected to compete in 26 sports over the next fortnight.

Terai Sadler had a dream start to her basketball career straight out of high school in New Zealand by scoring a scholarship to study and play college basketball in the United States.

She will represent the Cook Islands in basket ball at the Pacific Games in Samoa.

She spoke to Tauraki Rongo.

"Basically when you finish high school basketball in New Zealand there's no pathway for women. I wanted to continue playing basketball so the States seem like a good option for me, and I got a scholarship obviously free education on top of that so why would I turn that down. My coach knew someone who knew someone over there, so that's how a ended up over there," she said.

Tauraki Rongo: She spent four years in the States on this basketball scholarship which helped her understand the sport in its entirety where she was able to draft out her own career pathway.

"So I was there for four years altogether, I spent two years at a junior college and after that I transferred to a division one school, Central Arkansa College in Arkansas. You know it was it was super competitive which is why I went there, I wanted to play good basketball, get better at basketball and then also get an education out of it as well."

Tauraki Rongo: Opting to play for the Cook Islands instead of being a bench warmer for New Zealand wasn't a hard decision to make as she was called in to be part of the Cook islands women's three on three team in 2017.

"Donielle one of the Cook Islands Basketball players in our team now, she got in touch with me when she heard I was a Cook islander. You know she said, hey there's a chance for Cook islands to put a three on three team in a competition in Australia. And she sort of asked me if I was interested in playing? I was really surprised because I didn't even know that Cook Islands had a basketball team of any sort."

"We came third to New Zealand and Australia, and we actually lost to New Zealand in overtime which was really tough. Yeah we were definitely competing with them and we weren't you know too far off their level. We did really well for our first ever tournament," she said.

"From there we actually qualified for the three on three world Champs which was in China, which was another awesome experience that we got to go and experience. But this was all through our own pockets and we were all paying our own way to playing to represent Cook Islands. Yeah it was definitely worth it and we thought it was a good way to set up a foundation for future Cook Islands basketballers coming through. "

Tauraki Rongo: While the girls are still together and doing very well at a sport normally dominated European and American affiliated teams the onus now sits with the Cook islands basketball association or the cook islands sports and National Olympic association as to how they can support and build on the team's success.

"I think it's hard because you know when we first started Cook islands basketball, there wasn't much if any support for us. it took a few years and a lot of wins before they finally decided oh you know maybe Cook islands basketball can go somewhere. So yeah it definitely wasn't easy and I think a few gold medals in the last few games has finally sort of open the eyes and be like wow Cook islands Womens Baskeball can go somewhere, So yeah I think it shouldn't be about male or female but should be about your results and how your team is doing,"she said.

Tauraki Rongo: Winning the Oceania cup in 2018 have placed this Cook Islands women's basketball team as medal favourites at the coming Pacific games.

"We had really good wins by good margins so I think we have a lot more to prove, and I think we are really really strong against the other Pacific teams so yeah we want nothing but a gold medal at this next game. I mean it means a lot, like Cook islands is such a small small nation compared to the rest of the world. We have a lot of pride in representing Cook Islands and sort of putting our name on the map."