The local government representing Bikini Islanders displaced by US nuclear weapons tests is looking to subdivide some of the land it bought recently on the Big Island of Hawaii for resale to generate revenue that could be used to support the development of adjacent land for possible future resettlement by Bikinians. 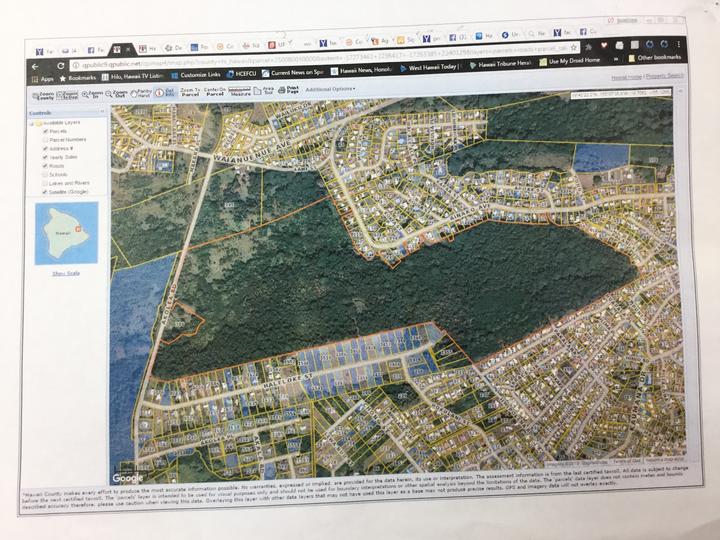 This map shows the 114.5 hectares of undeveloped land purchased by Bikini Islanders outside of Hilo on the island of Hawaii in green (bordered by an orange line), with existing housing around it. Photo: Supplied/ Giff Johnson

But a recent effort by the previous owner to subdivide this Big Island property sparked objections from residents in neighbouring already-developed properties.

Kili-Bikini-Ejit Mayor Anderson Jibas said the plan is to initially develop a portion of the property into individual one-acre lots that can be sold on the open market to begin recovering the $US4.8 million spent to purchase the 114.5-hectare property.

Later, a portion of the property located to the northwest of the city of Hilo may be developed for use by Bikinians, he said.

"The intention is to first develop the phases of the project that will be sold on the open market," Jibas said.

"This will allow the portion of the project set aside for the Bikinians to be self-funded. The timeline for this (later) phase of the project is still a number of years out.

"However, if the need does arise this portion of the project could be developed sooner."

The Bikinians have lived in exile since nuclear weapons testing started at Bikini in 1946.

Today, most of the Bikinians live on Kili and Ejit Islands in the Marshall Islands.

While radioactive contamination of Bikini Atoll has kept them from returning home, rising sea levels due to climate change is an additional motivator for the Bikinians to look for resettlement options.

Although the Mayor said he doesn't "see any issues that would delay the development of the project," the previous owner of the Big Island property was unable to gain immediate Hawaii County approval of a plan to subdivide close to half of the property into 49 individual lots.

The area is zoned as agricultural land, which requires a minimum size of 0.404 hectares for any subdivision of lots. Akalea LLC sold the 114.7 hectares in April to the Bikini local government, five months after it had attempted to subdivide a portion of this property.

This sparked a range of objections from residents living around the large undeveloped land related to flooding and water issues that could affect already built housing around the Akalea property.

One of the reasons for concern about flooding is that the Hilo area averages between 330cm and 500cm of rainfall annually depending on elevation.

In deferring approval, Yee said the company needed to provide additional information and plans for review by the county.

Yee pointed out that the 114-acre property has the potential for "200 plus lots with the current County Zoning designation of A-1a".

Yee said Akalea needed to provide a master plan for the property and all adjacent property owned by Akalea LLC - land now owned by the Bikinians.

The required master plan needed to clarify all proposed land uses for the 114 hecatres, road circulation plan showing connectivity to adjacent properties and existing or proposed roadways, and "environmentally sensitive areas and floodways," according to Yee's response to Akalea's initiative to sub-divide 48.1 hecatresof the property.

Less than a month after Akalea's subdivision plan was deferred by the Hawaii County Planning Department, the KBE Local Government established a limited liability company in Hawaii: the Bikini Atoll Moriba LLC.

The new Bikini LLC was registered with the State of Hawaii February 22, 2019. Two months after establishing the Bikini Atoll Moriba LLC, it agreed to purchase the 114 hecatres of land from Akalea LLC for $US4.8 million.

Despite issues surrounding Akalea's attempt to subdivide the property, Mayor Jibas is confident that developing land for resale on the Big Island of Hawaii will be straightforward and without delays.

"Proper compliance with all regulations and permitting have been accounted for in our due diligence of the project," said Jibas.

"Based on the plan that is in place we don't see any issues that would delay the development of the project."

The Mayor added that "all County/State regulations that need to be met are administrative in nature, which means there are no discretionary regulatory issues to overcome".

Still, Big Island residents living near the Bikinians' new property raised a range of concerns to Hawaii Country Planning Department when Akalea announced last December its plan to subdivide and develop part of the 114 hectares.

Local residents said existing flooding problems in the area would be exacerbated by residential development of this currently undeveloped land, that damage could be done to Ainako Stream that runs through the area and wetlands in the undeveloped property, and that changes to Ainako Stream as a result of developing this property would negatively impact neighboring properties.

"If the developer's work near the springs that originate Ainako Stream reduces the normal stream flow, this will have significant impacts on the community and likely generate lawsuits," said Ainako Avenue residents Mark and Carol Johnson in January commenting on the proposed subdivision.

"There have already been lawsuits in the neighborhood over reduced stream flow."

"Ainako Stream has been an iconic feature in the Ainako subdivision since the subdivision was created in 1947," said local resident Scott Henderson in a letter of opposition to the Akalea LLC plan.

Henderson spoke about wetlands and water quality that would be negatively affected by developing this land.

"Based on a litany of potential short-term and long-term negative effects that would result from a dense housing development being laid over this extremely sensitive landscape.

"I strongly oppose approval of the project, especially in light of a nearly complete lack of natural and cultural resource survey data and mitigation plans that should be built off of such data," Henderson said.

"My worst fear is that a developer on the land above us will rip across natural 'auwai (irrigation ditches developed by native Hawaiians) and remove ground vegetation and trees which are slowing and causing runoff to filter rather than flow past our homes at the lower elevations," Big Island resident Maud Lawrence said.

Mayor Jibas said that the local government has already taken into account the various issues for developing the property.

"County/State regulation compliance, design, permitting and infrastructure have been factored into the development timeline and budget," he said.

"The project will be developed in phases. As the project is developed money will be recouped by the sale of lots which can then be used for the next phase(s) of the project.

"Based on the plan that is in place we don't see any issues that would delay the development of the project."