Christopher Lagisa didn't expect his Wednesday to be so busy. But it was spent in his pick-up truck, driving back and forth in the darkness of midday, swerving to avoid rocks as the windscreen wipers struggled against the thick ash.

Mr Lagisa is from Ulamona village, which sits at the foot of Mt Ulawun, one of Papua New Guinea's most active volcanoes which burst into life on Wednesday morning, hurling ash some 17km into the air.

The 2334m mountain, which sits in a remote area near New Britain's northern coast, started erupting about 7am. First there were earthquakes, Mr Lagisa said, then it started puffing white smoke, which grew darker as the morning marched on.

By about midday the sky had become pitch black, the only colour being the flashes of lava flaring from what locals refer to as 'The Father,' which was spitting rocks into the village.

"It became so intense around lunchtime," said Mr Lagisa. "It started throwing ashes over Ulamona and that's when we felt it was an appropriate time to evacuate the population of 3000."

For that, he said, they used whatever they had - a couple of utes, a land cruiser and some fruit trucks - to create a convoy to move back and forth, evacuating residents to a safe zone some 20km away. Other villages around the mountain were doing the same. In all, the government estimates at least 5000 people fled their villages on Wednesday. 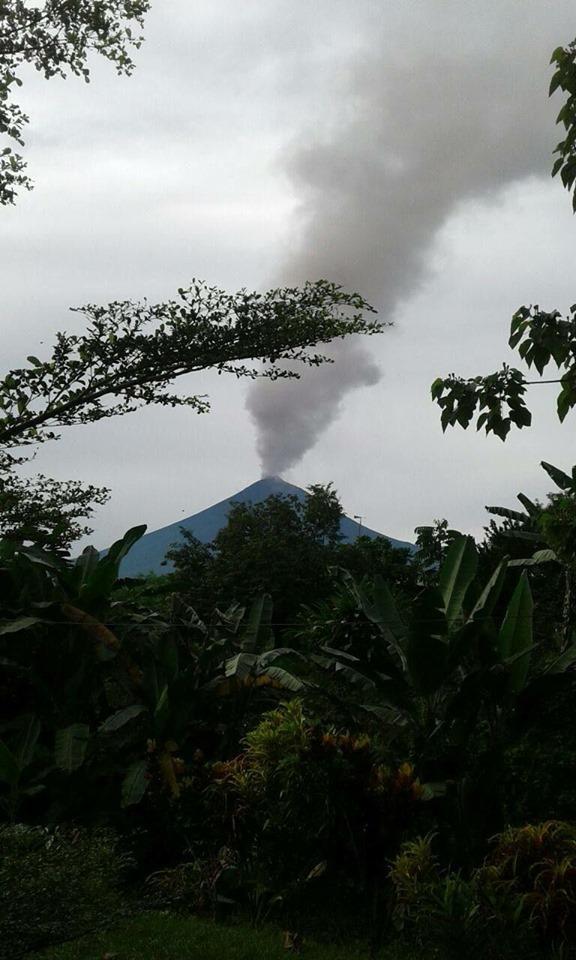 "We used the fruit trucks to load as many people as we can and move them off," said Mr Lagisa. "We had stones being pelted on us. We had to be careful how we drive because it might break windscreens.

"It was dark. It was very dark. Raining ash. All the trees and the oil palm leaves, with the weight of the ashes, some of them broke off and bent down."

The villagers of Ulamona spent Wednesday night in an oil palm plantation, sleeping in the open, Mr Lagisa said.

On Thursday, the volcano appeared to have settled down, said Steve Saunders, from the nearby Rabaul Volcano Observatory. "It looks like it was just one big bang yesterday," he said. "It's quietened down today."

Still, the West New Britain government on Thursday declared a provincial State of Emergency, deploying rapid response teams with food and medicine to the affected area. Those who had evacuated themselves were being urged to stay put for at least another two weeks until authorities know for sure that the volcano has settled.

The people of the relocated Ulamona would likely need assistance for months, Mr Lagisa said. They went to sleep in the open without any food on Wednesday night, he said, and they were in desperate need of food, water and shelter.

Back at Ulamona village, their crops have been smothered by ash and water supplies contaminated, setting them back to square one after what had been a difficult 2019 for the people of West New Britain.

It started with three months of torrential rain from December through to February, which washed away crops and ruined landscapes.

"We ran out of food and we asked the provincial government [for some]," Mr Lagisa said. But that took four weeks to arrive and ran out in three days. "People had to scavenge here and there to make ends meet." 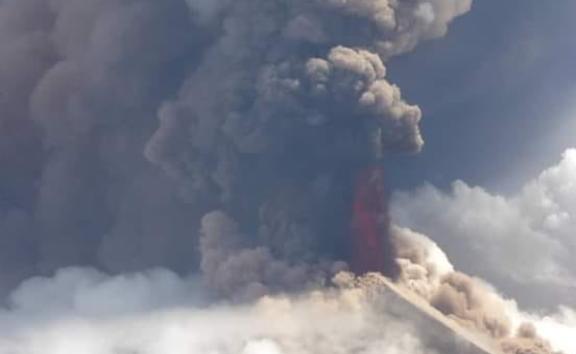 Then, because the rainy season had washed out the region's dirt roads, trucks couldn't get in to collect the oil palm crop, the economic lifeblood for the area. Only recently were the roads repaired and the people able to earn an income to buy food, Mr Lagisa said.

"Then we were hit by this other disaster."

In a statement on Thursday, the provincial disaster committee - which is based in the capital, Kimbe, some five hours drive away - said that food supplies would be distributed to the region, and planning was underway for an aid effort that could last as long as long as three months.

Mr Lagisa said the first of those government officials arrived late on Wednesday night to help with the evacuation. "By then we had evacuated everybody."

"That's always been the case when there's an eruption. They come, but they're always late," he chuckled.