More than 3500 athletes from 24 nations from Oceania will gather in Samoa on 7 July for the Pacific Games - the biggest sporting event in the Pacific region.

Margarette Nena is representing the Cook Islands. She has previously represented her country in netball, touch rugby, sevens rugby and now for the first time, rugby league nines.

"I've seen a couple of injuries coming through with netball that maybe deterred me a little bit from having to go back to that sport in particular, so, hence the reason why I took up the challenge with rugby as it's on the grass and I feel like the impact on the grass is not as high as it is on the netball court. I know that a lot of people think, you get tackled and you get chucked around and what not and I'm always like, yes, that happens but it doesn't impact my knees as much as netball does as there's a lot of stopping and starting and jarring of the knees but in terms of rugby, it's more continuous. All that kind of movement is ok for me to deal with at the moment."

Margarette has a busy life, playing top level rugby, studying and juggling being a mum. With ten years of international rugby under her belt she's still passionate about representing the Cook Islands.

"I remember, it was held over in Borneo, it was my first time playing for the Cook Islands Sevens womens team and I had never played with these women before, we had some more experienced players I had heard of, who were inspirational. I just remembered being nervous, I remember being so proud to be able to represent my country, my family. The biggest thing was having to put on the green jersey, it gave me such pride to be able to do that, as this was new arena, this is out in the grass, out in front of a huge stadium full of people, jammed packed with people." 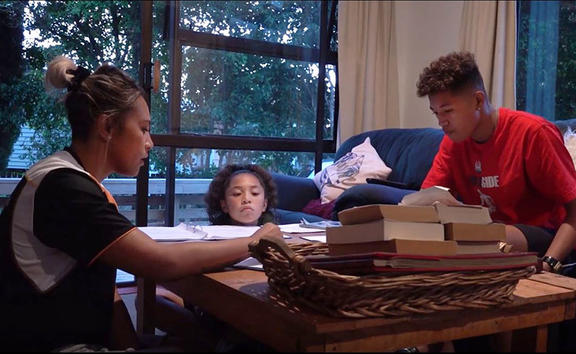 Even though playing at international level demands a lot of focus, time and commitment, her children are still her priority, Margarette said.

"I take them with me to training because I want them to see Mum, reaching for her goals and knowing that they are there are on the side and seeing that, makes me push that bit harder to make sure that with every run there is purpose, with every pass there is purpose. I have brought them to all my training and all my games ever since they were babies and now that my son is 14 years old and my daughter is now 10, they are both beginning their own journey, in their sporting career."

But with two children and at the peak of her sporting career, Margarette decided she wanted to study a teaching degree.

"So the challenge was put to me by an ex-colleague of mine and the journey has been hard."

This is the first time Margarette has represented the Cook Islands in rugby league but she is not giving too much away as she prepares to join the Team Cook Islands in Rarotonga before travelling onto Samoa.

"Oh my goodness, I'm nervous again, any competition that you go into, I'm always nervous. Just as long as I do my part, my role and my duty out on the field, that is required, then I know I'm contributing to the bigger picture of helping the girl beside me and then and overall helping the team to go forward. As long as I focus on me first, do my job really well, and help out my sisters beside me, it should be good."