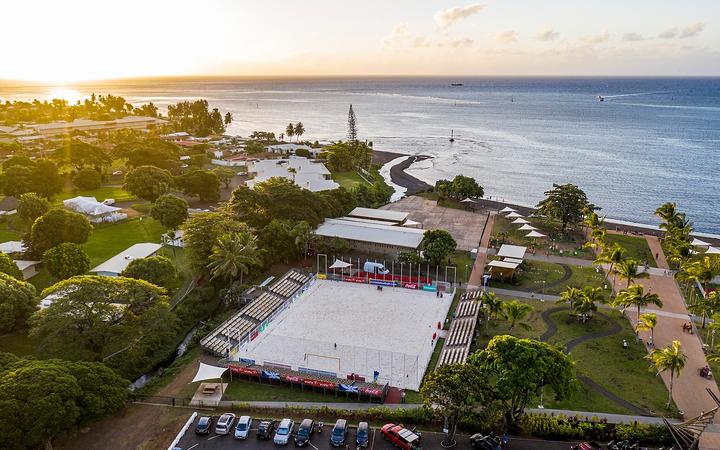 Tahiti's Parc Aorai Tini Hau where all the matches of the OFC Beach Soccer Nations Cup 2019 will play out. Photo: Shane Wenzlick / www.phototek.nz

The Oceania Beach Soccer Championships kick off today today in French Polynesia after a six-year hiatus.

As well as the regional crown, a berth at this year's FIFA Beach Soccer World Cup in Paraguay is up for grabs.

They are joined by Solomon Islands, New Caledonia, Vanuatu and Tonga, which is making its debut on the international beach soccer scene.

"We know we talk a lot of Vanuatu and Solomon but there is New Caledonia also there," he said, adding that New Caledonia's strong eleven-a-side form could translate well to the sand-based code.

"They will want to beat Tahiti of course because we are favourites in this tournament so we have to concentrate 100 percent," he said.

With double-headers scheduled over six consecutive match days, each of the five teams will face each other once in a round robin format before the final and the third-place play-off.

Solomon Islands coach Gideon Omokirio said the Bilikiki will be treating every match like a final.

"The last time we met New Caledonia they are a very good team but for the Solomon Islands we will approach every game as a final. We respect all the teams...and we will do our 100 percent performance in all games," said Omokirio.

The other match today will see hosts Tahiti take on Vanuatu at 4 pm.

All matches are being streamed live by OFC TV.