The Australian prime minister Scott Morrison arrived in Solomon Islands yesterday on his first official overseas visit since the elections.

In a statement ahead of the trip prime minister Morrison said he was pleased that his first overseas visit was to Australia's own neighbourhood, where he said Australia can always make the most difference. 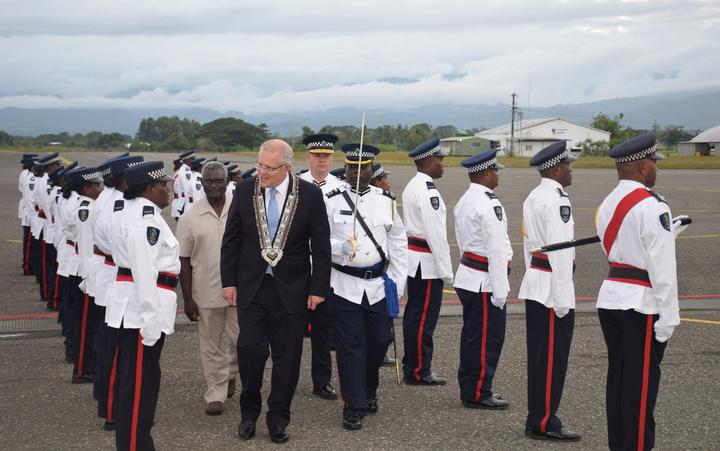 The Australian prime minister Scott Morrison inspecting a guard of honor by the Royal Solomon Islands Police Force upon his arrival in the capital Honiara. 2 June 2019 Photo: Solomons PMO media

The Solomon Islands prime minister Manasseh Sogavare welcomed his Australian counterpart saying the visit honored the long and steadfast relationship between their two countries and was part of strengthening and enhancing that shared bond.

Regional security, the climate crisis and China's geopolitical manouvering in the Pacific were expected to be on the agenda for the visit.

The Solomon Islands Broadcasting Corporation reports Mr Morrison inspected a guard of honor by the Royal Solomon Islands Police Force upon arrival in Honiara but neither leader made any official statements.

Among his engagements in the country today the Australian prime minister will be laying wreaths at the HMAS Canberra Memorial and the RAMSI Memorial at Rove.