The next time you're walking along Queen Street in downtown Auckland, cast your eyes to the town hall. 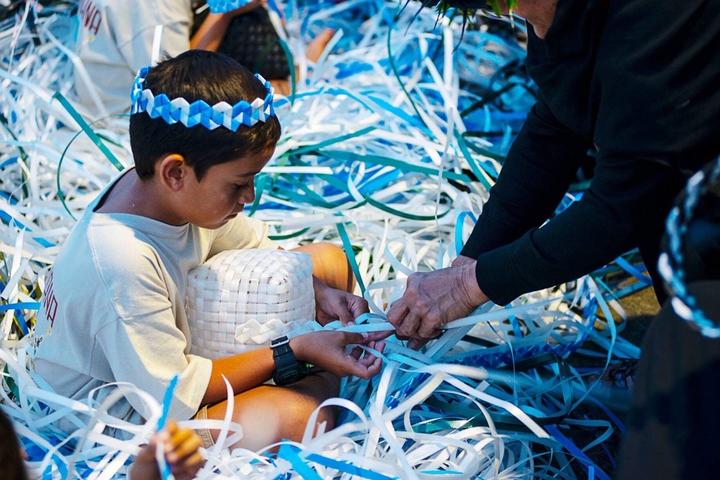 A group of Pasifika women in New Zealand have taken a pile of plastic rubbish and used their traditional skills to turn it into a thing of beauty.

The artists have gifted the enormous ei, or flower garland, to the city of Auckland, showing off their heritage and helping to raise awareness about the environment

Instead of fragrant flowers and fresh leaves, the 20-metre long ei now adorning the town hall in downtown Auckland is made of the bright blue plastic strapping used to bind boxes.

The ei was created by the Pacifica Mamas - a group of artists - formed in the late 1980s with its members originally from the Cooks, Kiribati, Niue, Samoa, Tokelau, Tonga and Tuvalu.

The director of the Pacifica Arts Centre, Jarcinda Stowers-Ama, a Mama herself, said the 12-month-old ei project was a joint venture between the mamas, the community and the Auckland Council.

"The real kaupapa, or the idea behind it, was to create a piece of work - create a very large scale art installation that looked at the stories of the people that live in Auckland," she said.

The Pacifica Mamas consist of weavers, carvers, tapa artists, orators and performers, and they run workshops, education programmes and exhibitions.

The focus of this project was to share the Mamas' Pacific art, knowledge and skills in their community, Ms Stowers-Ama said.

She said this was the first time the group had been involved in such a project.

This creation by the Pacifica Mamas - a pendant- sits in the town hall foyer. Photo: Christine Rovoi

"But what's special about the ei is the mamas decided to use materials that were sitting in our landfills in West Auckland," she said.

Ms Stowers-Ama said the children had also played a huge role in the project - over 300 young people helped create the ei.

"So from this project it's really started conversations about the step forward and how we can use creative solutions to help with our waste problem that we have at the moment."

The Arts and Culture officer at Auckland Council, Reina Sutton, praised the Mamas for repurposing the waste materials that "would otherwise end up in the rubbish collections".

"And turning it into something that's really beautiful and really meaningful is a real testament to the Mamas and their kopapa and what they're doing in terms of thinking about future generations and passing on knowledge," she said.

"And trying to make sure that there is a better environment for the kids when they grow up and pass that on."

Ms Sutton, who is originally from the Solomon Islands, said the council was keen to explore more projects with the Pacific communities that addressed sustainability and responsibility to the environment.

"Especially when you think about how we grew up in the islands, how we're using materials from Mother Earth and how that was just naturally broken down, back into this natural cycle that happens," she said. "It's affecting our people back home."

The ei in downtown Auckland was installed on 9 May and will be taken down on 9 June.

The Pacifica Mamas said they would repurpose it, and maybe turn it into another creation. 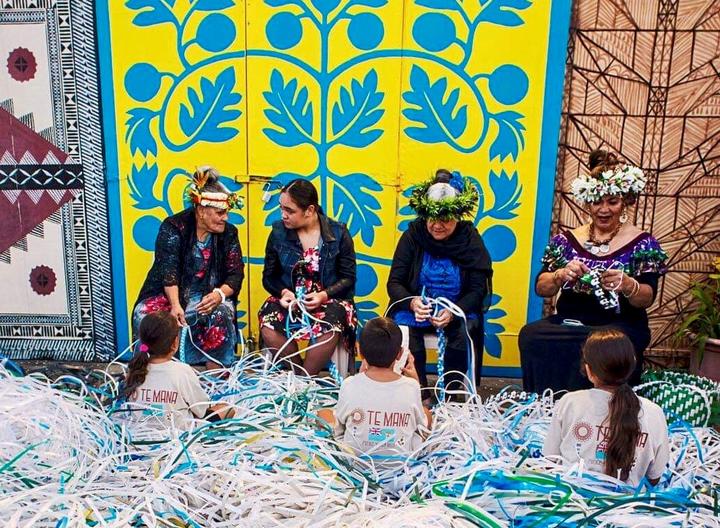 Pacifica mamas teach the young ones how to make an Ei. Photo: Supplied