The United States has reaffirmed security cooperation with Palau, the Marshall Islands and the Federated States of Micronesia after an historic presidential meeting. 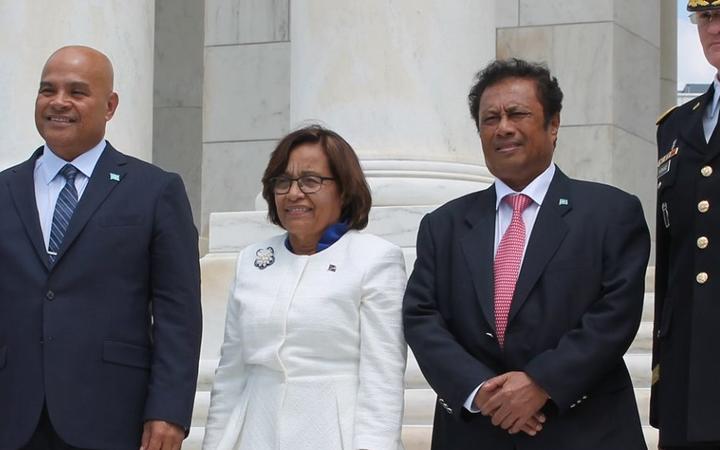 The Pacific delegation in Washington DC. Photo: Facebook/ Office of the President, Republic of Palau

On Tuesday, US President Donald Trump met with his counterparts in Washington and renewed commitments to the Compacts of Free Association.

According to a joint-statement released after the talks, the nations agreed to maintain a free, open and prosperous Indo-Pacific region.

They also resolved to continue using platforms like the Pacific Islands Forum to tackle issues including natural disasters and illegal fishing.

"Our nations believe in an economic development model that supports inclusive economic growth and an environment in which the autonomy of all nations is respected," the statement said.

The talks between Mr Trump, Palau President Tommy Remengesau, Marshall Islands President Hilda Heine and Federated States of Micronesia President David Panuelo did not focus on China, according to US officials speaking before they started on Tuesday afternoon.

However, Mr Remengesau had last week suggested the Indo-Pacific strategy was a direct counter to China's expansionism and militarisation in the Western Pacific which threatened to escalate into war. Officials on a conference call on Tuesday downplayed this, saying no country was the focus of the strategy.

The joint-statement released after talks appeared to reaffirm this caution, saying the interests of the US and the Freely Associated States were focused on maintaining the Pacific Ocean as "an important and vibrant corridor for maritime trade.

"We seek to continue encouraging private-sector investment and trade between our countries and to strengthen the bonds between our peoples."

Maintaining a free and open Pacific was also the subject of talks between the Pacific leaders and acting US defence secretary, Patrick Shanahan, according to a department of defence statement.

The White House joint-statement also acknowledged the sacrifices of people in Palau, the Marshall Islands and Guam who served in the US military.

Earlier on Tuesday, a senior US official, requesting anonymity, said the government was working on ways to expand veteran support and benefits in the Freely Associated States.