The UN Secretary General says he intends to mobilise the international community around the Pacific's need for action on climate change. 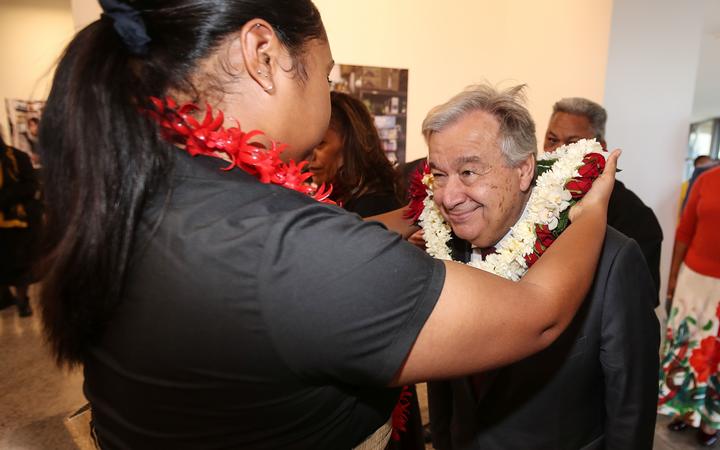 Antonio Guterres attended a community roundtable event in Auckland today, as he kicked off his Pacific tour.

He departs for Fiji on Tuesday before heading to Tuvalu and Vanuatu to complete his regional tour.

Mr Guterres said the Pacific islands were the first victims of climate change.

"Not only some of them because of the rising level of water represents an existential threat, some might disappear, but also because of course climate change brings with it a lot of negative conseqences," he said.

"Warming the oceans, acidification, coral bleaching, but also bigger storms, lots of negative impacts in their economies and an impact in their security."

The situation was made even more difficult by the challenges small island states face, Mr Gutteres said.

"Everything is more expensive to get there. On the other hand it is very difficult to compete, how can you export if you are so far away? If you are sometimes so small, how can you be competitive with other parts of the world?"

The world had already seen the Pacific facing big challenges in implementing the UN's so-called Sustainable Development Goals in relation to poverty, health, education, industiralisation and the enviroment, the Secretary General said.

But Mr Gutteres added that the size of the oceans surrounding the islands also presented issues.

"Pacific islands are small in land but big in ocean, in sea," he said.

"But we see that unfortunately they have also been victims of overfishing by foreign countries that profit from their lack of capacity to fully patrol their water. (By) the dramatic negative impact, as we have seen in the ocean, plastics in the oceans have been growing enormously."

It was all these issues that brought Mr Gutteres to the Pacific.

During his Auckland stop, Mr Guterres also said taxes should be shifted from salaries to carbon, saying pollution and not people should be taxed while subsidies on fossil fuels should be stopped. 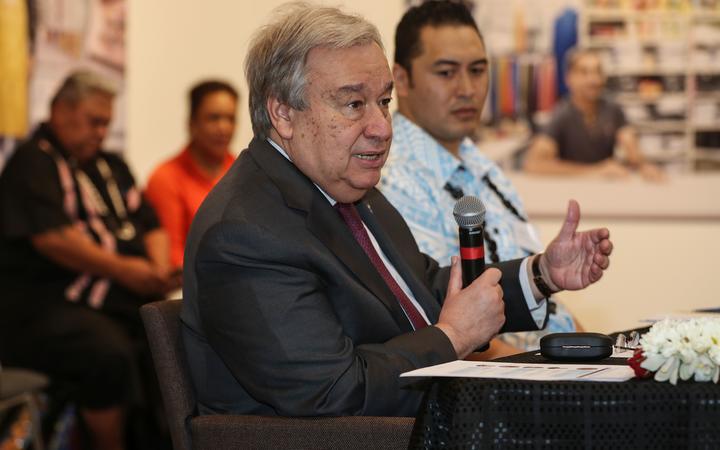 The UN Secretary General will meet New Zealand's Foreign Affairs Minister Winston Peters this evening before they travel to Fiji together to attend a Pacific Islands Forum Leaders' meeting.

Mr Peters said the visit was an opportunity to shine a spotlight on issues facing the region to the UN's top official.

Responding to climate change was a key focus for the Pacific and New Zealand wanted to show that transformative action was possible, even by the smallest countries, through innovation and ideas, he said.

"We want the UN Secretary-General to leave the meeting as a champion for our region, playing a constructive role in bringing knowledge, finance, and support from the international community," Mr Peters said.