Miss Pacific Islands Leoshina Kariha has added her voice to the global climate change campaign - this week addressing participants from around the world at the South Pacific Tourism Exchange event in Auckland. 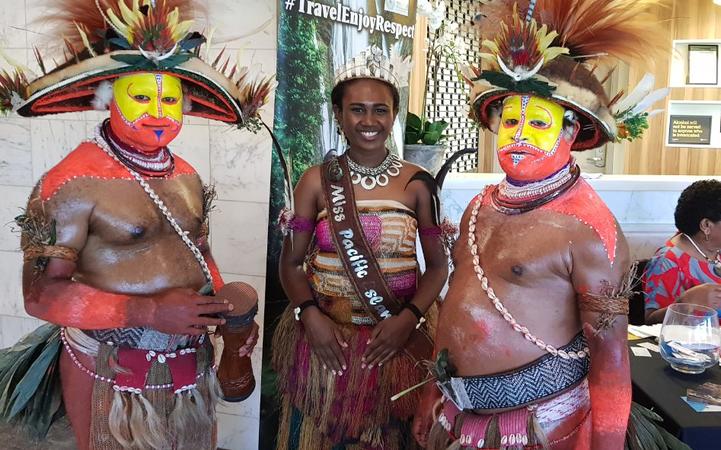 Ms Kariha, of Papua New Guinea, said more needs to be done - from banning plastics to being sustainable in our daily use of materials.

The 19-year-old Bougainville native said the islanders have also suffered due to climate change.

"Bougainville had the first island in the world go under water because of climate change. That was traumatic to see the effect it had on our people where they had to resettle on mainland. And for the land that they would like to honour because of their ancestors is gone. Not only Bougainville is going through this. It's the entire Pacific."

Leoshina Kariha said she is working with youth groups across the Pacific on climate change issues.

This, she said, included planting mangroves along the beaches in Nauru.

Ms Kariha also praised the 'No-Pelesitiki' campaign in Tonga and the island kingdom encouraging its people to use fabric bags and baskets woven from coconut fibres as an alternative.

"It's about those small actions that you can take as an individual to start saying, to give that message - know we are going through these challenges and we are going to do something about it.

"And not just throwing the blame. We are taking responsibility to start changing our situation."

Ms Kariha, who is the PNG and Pacific ambassador for tourism, said she would be working with the event organisers from the South Pacific Tourism Organisation (SPTO) to promote climate sustainability.

Ninety-four sellers from 17 Pacific nations are also in Auckland this week to promote their products at the tourism exchange event.

Initiatives include the Agri-tourism projects in Kiribati, the re-branding of the Solomon Islands and the 'One Island One Product' in the Marshall Islands.

The exchange is organised by the SPTO and sees Wallis and Futuna attending for the first time - only joining the SPTO last year.

The theme of the event is Sustainable Tourism Development through people to people connectivity.