Papua New Guinea's parliament has been adjourned after a brief resumption today, as the opposition makes a push to remove Prime Minister Peter O'Neill.

After a day of parliament proceedings in which Mr O'Neill largely frustrated his opponents' moves, the opposition said it had lodged a motion of no confidence against the prime minister with the Parliament Speaker, Job Pomat.

It has resulted in the most serious challenge to Mr O'Neill's leadership since 2012, kicking off an intensive political fight between two similarly sized groups seeking to be the government.

A number of the MPs who have left the government claim that Mr O'Neill has concentrated too much power on himself and a circle of cronies, while allowing bad governance to fester.

The government and the opposition group have been lobbying in respective camps in Port Moresby hotels for the past several days.

At the weekend, both groups claimed they would have a majority in the 111-seat parliament, and today's return to parliament showed how the numbers are tight.

The opposition leader Patrick Pruaitch raised a motion to remove the Speaker but was defeated 59 votes to 50. It was the same margin in a vote to adjourn parliament, which the government again won.

Parliament is adjourned to May 28th, giving Mr O'Neill more time to consolidate his support in a fluid political environment following the resignations of some of his closest supporters.

Today's parliamentary question time saw Mr O'Neill grilled by Mr Marape and other MPs on his government's handling of resource wealth and the country's towering debt.

The prime minister said a lot of the issues related to decisions made by government under the previous prime minister, Sir Michael Somare. Mr O'Neill was a senior minister in that government.

However, with the opposition lodging the motion, the ball is now rolling for an eventual vote against the prime minister.

Before it is allowed to be tabled, the motion will be vetted by a parliamentary private business committee which sits tomorrow. If it has met all legal requirements, the motion can be moved, with the resulting confidence vote to be held a week later.

But as a result of today's parliamentary proceedings, two members of the private business committee were replaced in a move that could dim the prospects of a confidence vote happening soon.

Southern Highlands Governor William Powi and Hela Governor Philip Undialu were both members of Mr O'Neill's party who broke away from the government in the past two weeks.

They have been replaced on the committee by government MPs as part of what Mr O'Neill called a re-balancing of the committee which is intended to have fair representation from both sides of parliament. 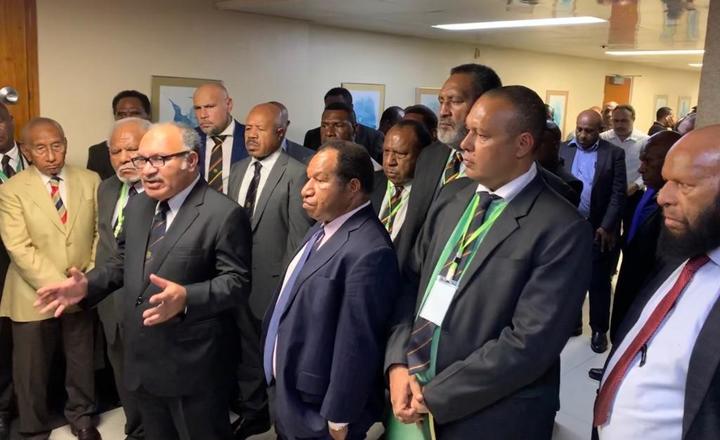 After the parliament session, Mr O'Neill struck a confident figure. Explaining the adjournment of parliament for a few weeks, he said it was to allow the government time to replace the ministers who had resigned.

"The government is well and truly solid, intact, and we are ready to work," he said, thanking his remaining coalition partners.

The prime minister admitted there were some issues in the People's National Congress.

"We have some in-house issues, and of course there's always some leadership ambitions within a big party like PNC.

"All in all you can see the strategy that the opposition has tried out: it is to try and test the numbers to remove a sitting speaker today. Well obviously that failed," he said.

Mr O'Neill also indicated he had taken note of the concerns of defecting MPs.

"I have listened to the concerns raised by many of the leaders, the issues they have raised, including issues of public service bureaucracy and all the other issues... we will start addressing them over the course of the next weeks."