Papua New Guinea is doing all it can to ensure the welfare of refugees detained on Manus Island by Australia, the PNG prime minister says. 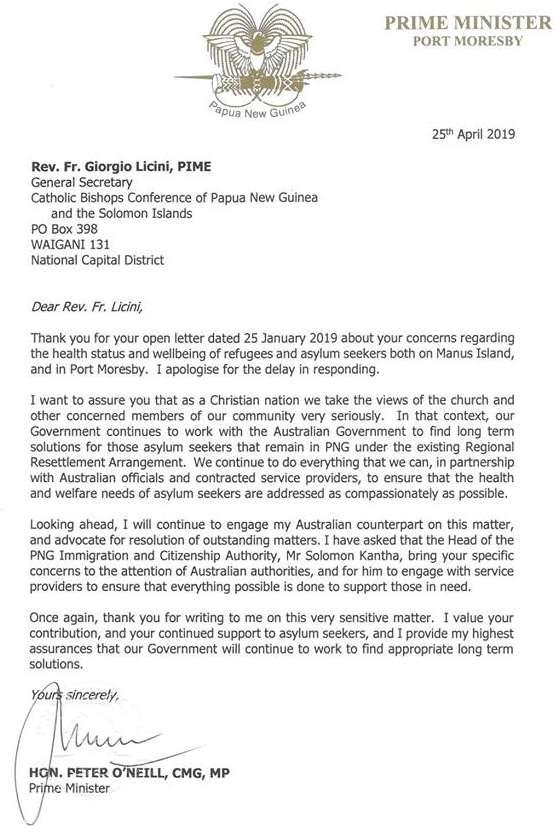 Peter O'Neill wrote to the Catholic Bishops Conference of PNG this week, three months after its general secretary, Giorgio Licini, had written to him, saying more refugees would die unless they were taken out of PNG for medical treatment.

After visiting Manus in January, Fr Licini told RNZ Pacific that self harm and suicide attempts were "a daily occurrence".

In his letter, Mr O'Neill said he was continuing to engage with his Australian counterpart to advocate for the resolution of these matters.

"Our government continues to work with the Australian government to find long term solutions for those asylum seekers... We continue to do everything we can in partnership with Australian officials and contracted service providers, to ensure that the health and welfare needs of asylum seekers are addressed as compassionately as possible."

Mr O'Neill's letter was received as a refugee on Manus was taken into police custody for attempting suicide.

From the Island, refugee advocate Ian Rintoul told SBS "anywhere else but Manus Island, it would be unbelievable that someone who is having a mental health crises is actually confined to a police cell".

"There no crime - it's only because of his mental health situation and he attempted suicide and that's why he's been placed there," Mr Rintoul said.

Another refugee on the island also attempted suicide this week, according to Sri Lankan refugee Shaminda Kanipathi.

"The highly depressed man was taken to hospital," he said.