Samoan businesses, churches and individuals have been implicated in a multi-billion dollar global cryptocurrency scam. 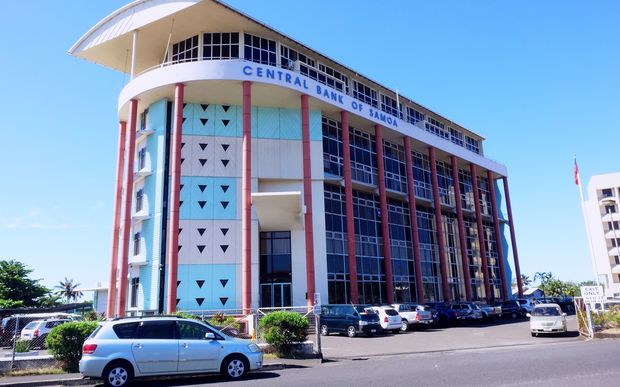 The Central Bank of Samoa in the capital Apia. Photo: RNZI/ Koroi Hawkins

OneCoin has been labelled by the US Justice Department as a pyramid scheme that defrauded investors out of billions.

Samoa's Central Bank said in a statement that it placed a ban on all transactions using the cryptocurrency in May last year.

But, citing a report from New Zealand's Financial Intelligence Unit (NZFIU), it said OneCoin circumvented the ban by funnelling money through New Zealand.

The Central Bank added that church ministers had been identified as promoters of OneCoin who encouraged members of congregations to invest.

It said there were a number of Samoans and Samoan Money Transfer Operators implicated in the report from New Zealand and investigations or further action may be taken by the Central Bank.

The statement added that the 124-page intelligence report it received from the NZFIU estimated that $US2.3 million was transferred out of New Zealand, but it did not clarify how much of these funds reached Samoa.

Money laundering carries a maximum penalty in Samoa of 15 years imprisonment, a maximum fine of around $US374,000 or a combination of both.

OneCoin's leader, Konstantin Ignatov was arrested in Los Angeles on March 6 on a wire fraud conspiracy charge and has been detained.

In a statement on March 12, the company said "Mr Ignatov has not been formally charged with a crime and is entitled to a presumption of innocence.

"Transparency is one of the core values of OneCoin and we stand firmly behind this belief," the statement added.