The resignation a senior cabinet minister has rattled the government of Papua New Guinea Prime Minister Peter O'Neill, in the biggest move against his rule since the 2017 election.

This time the attack came from within. At midday on Thursday, local time, Mr O'Neill's finance minister James Marape, who is also the deputy prime minister, announced his sudden resignation. He will continue as a backbench MP.

Hours later, Mr O'Neill's defence minister, Solan Mirisim, also widely reported to have resigned, according to several media reports and two people with close ties to the PNG government. However, he did not respond to RNZ's requests for comment.

Then, on Friday, Mr Mirisim told a news conference in Port Moresby that he was staying in Mr O'Neill's government. Reports of other planned resignations also never came to fruition.

But even if there was no exodus, the loss of Mr Marape, who has been finance minister since 2012, is a big loss for Mr O'Neill's government. A member of Mr O'Neill's People's National Congress, Mr Marape has long been a strong ally and confidant of Mr O'Neill through years of scandal and economic struggle.

The resignation is understood to have come out of the blue, shocking people who work closely with him and several cabinet colleagues. 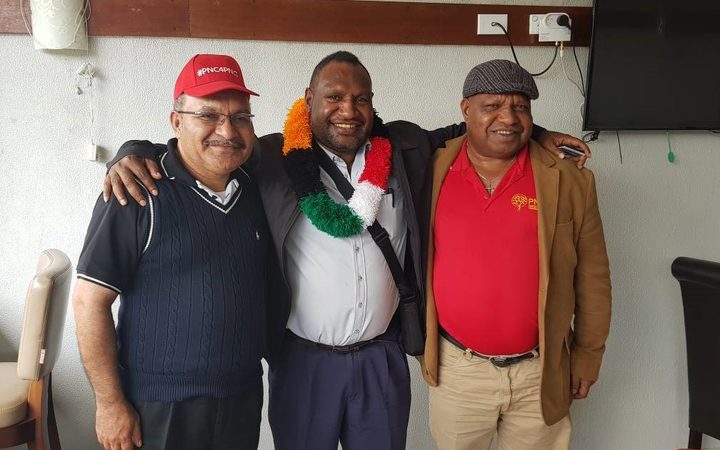 But despite an outward appearance of solidarity, Mr Marape's statement alluded to a rift that had been forming for many months. Trust between the pair had collapsed, Mr Marape said in a statement, with several differences of opinion on subjects like oil and gas revenue, resource laws and other economic matters.

"The level of trust between the Prime Minister and myself is at the lowest after his office and associates continue to send negative signals on their lack of trust on [sic] me.

"I have raised my views and concerns on those areas yet I have come to realise that most of my advices [sic] find no traction and is non compatible with Prime Minister's world view, thus it is only fitting that I exit cabinet," Mr Marape wrote.

The resignation came as Mr O'Neill was visiting PNG's north-eastern island of New Ireland, where he was apparently unaware of the resignations until they were announced in the media. A spokesperson for Mr O'Neill said Mr Marape had not yet been in contact.

Still, in a statement, Mr O'Neill said he would accept Mr Marape's resignation, seeking to play down the situation and suggesting that Mr Marape wanted to spend more time in his electorate.

"He has not spent enough time with his electorate and on issues close to his people," he said. "While his resignation is unfortunate, Government mas go yet," he added, ending in Tok Pisin.

But few in Port Moresby were denying that it was rattling for Mr O'Neill, who since 2012 has proven adroit at wriggling out of controversies and dodging repeated opposition attempts to oust him.

PNG's opposition recently declared its intention to table a motion of no-confidence against the prime minister when parliament reconvenes next month, claiming many government MPs were disgruntled with Mr O'Neill's leadership.

"James Marape resigning - a very senior leader and minister - is a very big vote of no confidence in Peter O'Neill," said one former MP, who spoke on the condition of anonymity.

The former MP, who still maintains strong ties within governing circles, said if other ministers did follow Mr Marape out of cabinet, which is still a faint possibility, then that could be fatal in a parliament where coalitions are loose and prime ministers can be toppled at the faintest whiff of blood.

A backbench MP from within the governing coalition, who also spoke on the condition of anonymity, said the situation at the moment was fluid, with rumours spreading like wildfire.

Parliament was due to sit on 7 May, he said, and the next three weeks could be vital in whether or not Mr O'Neill survived.

"Things might cool down or they might fire up," he said. "In PNG politics, anything can happen."