A government official from the Federates States of Micronesia (FSM), who was arrested in Honolulu this month on a money laundering charge, has been ordered to stay in Hawai'i pending the outcome of a federal court hearing.

Master Halbert, who is the Assistant Secretary of Civil Aviation in the FSM government's Department of Transportation, Communication and Infrastructure, was arrested on one count of money laundering in relation to a bribery prosecution of Hawaii-based engineering firm owner James 'Jim' Lyon.

Lyon pled guilty late last month to bribing at least two Micronesian government officials, including Mr Halbert and one Hawaii state official, to gain contracts worth over $US10 million in both locations. 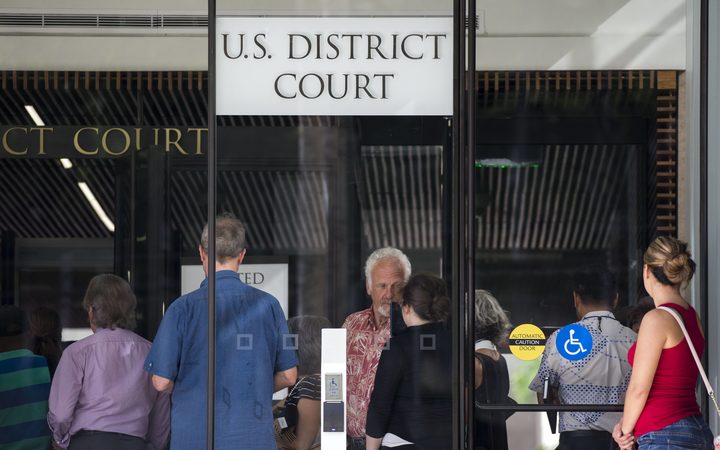 The US District Court building in Honolulu, Hawaii. Photo: AFP

The Honolulu Star-Advertiser reported judge Richard Puglisi released Halbert on a $US25,000 bond at his arraignment on Thursday despite objections from Katherine Raut, the attorney for the Fraud Section of the US Justice Department's Criminal Division.

Ms Raut argued that Halbert was a flight risk since he is a citizen of the FSM and not a Hawai'i resident.

Halbert is the son of a former long-time FSM senator from Pohnpei and son-in-law of FSM President Peter Christian.

Mr Halbert's wife, Annjanette Christian, put up the $25,000 bond and the judge ordered that Mr Halbert reside at her parent's apartment in Honolulu pending the outcome of the case.

A preliminary hearing is scheduled for 22 February. It will be used by the court to determine if there is good cause to proceed to trial.

Bribery charges against Lyon Associates owner Lyon said that he bribed Mr Halbert and at least one other FSM government official to obtain $US7.8 million worth of contracts in the FSM between 2006 and 2016.

Late last month, Lyon pled guilty to the charge and is cooperating with US Justice Department investigators. He also pled guilty to bribing a Hawai'i state official to secure a $US2.5 million contract in Hawai'i.

"In connection with his plea, Lyon admitted to paying bribes to FSM government officials, including Halbert, to obtain and retain contracts and to obtain contract payments for (Lyon Associates Inc.) from the FSM," said the nine-page complaint against Mr Halbert filed in sealed form with the US federal court on 24 January and unsealed following Mr Halbert's arrest.

In response to the arrest in Honolulu, the FSM government issued a media release stating that when the initial bribery charge was filed against Lyon in mid-January, the FSM formally requested the US government provide details of the situation.

This past Thursday, the US government informed the FSM that it "has approved the sharing of information related to this case that can be released, given the nature of this ongoing criminal investigation," the FSM President's Office said in a statement.

"The United States, under the Amended Compact of Free Association, is required to inform the FSM when FSM citizens are detained anywhere on US soil."

The office added: "Despite currently having limited official information related to this case, the National Government is nonetheless taking appropriate steps necessary to ascertain the extent of FSM laws that may have been breached or broken."

The nine-page complaint against Mr Halbert refers to emails between him and Lyon Associates officials regarding money for personal trips and shopping, and about the purchase of a vehicle in Hawaii.

The complaint says that in June 2015, Mr Halbert and Lyon "instructed Co-Conspirator 1 to draft a request for qualification document seeking bids for an FSM project management contract (PMU Contract), including drafting selection criteria to favour Engineering Company (Lyon Associates Inc.) in order to obtain an improper business advantage and win the PMU Contract".

The following month, Lyon was awarded the PMU Contract by the FSM government. The FSM PMU is in charge of managing hundreds of millions of dollars in US-funded infrastructure grants through the Compact of Free Association. 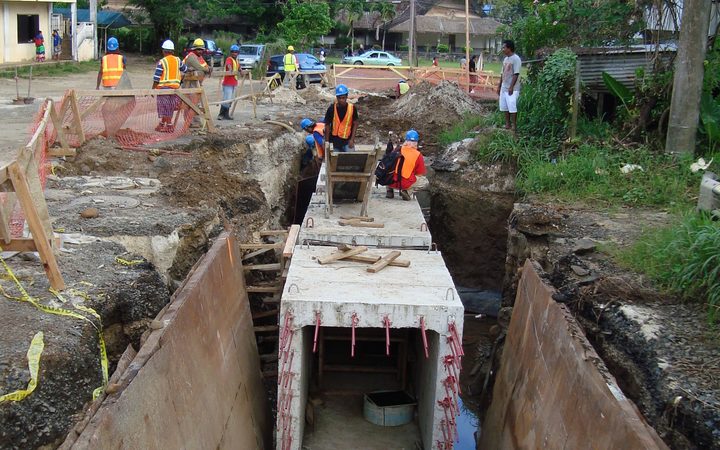 The FSM's Project Management Unit has overseen numerous US-funded infrastructure projects, including the over $25 million Chuuk road and sewer project (pictured here in this 2011). Photo: supplied

The Justice Department said the month after Lyon won the PMU Contract in 2015, Mr Halbert sent an email to Lyon with the subject line, "2014 Chevy Silverado," stating, "please get this truck. It is my cash so when I need to pay back anyone, I can sell it or this will be my ride forever. If you can, lift it 6 and put on black rims."

Later in 2015, however, relations soured between Mr Halbert and Lyon Associates, according to emails included in the complaint against Mr Halbert.

The complaint provides details of several alleged emails, starting 15 November, 2015, when Mr Halbert is said to have sent an email to a Lyon Associates official requesting that the company book and pay for a hotel room for him and members of his family for a trip to Guam.

The Lyon official responded that "at this time" the company was approving "only project reimbursable travel requests," according to the court complaint.

The next day, Mr Halbert allegedly emailed three Lyon Associates employees, "this is to inform you that I am closing your office starting tomorrow until further notice".

The day after that, Mr Halbert allegedly sent an email to a Lyon official, stating, "I'm greatly offended and hope this is the last time you will contact me. You have no business talking as you don't understand and appreciate how Lyon got this job... You're very disrespectful and insulting. For this, Lyon will never get another job in the FSM. I can make that happen".