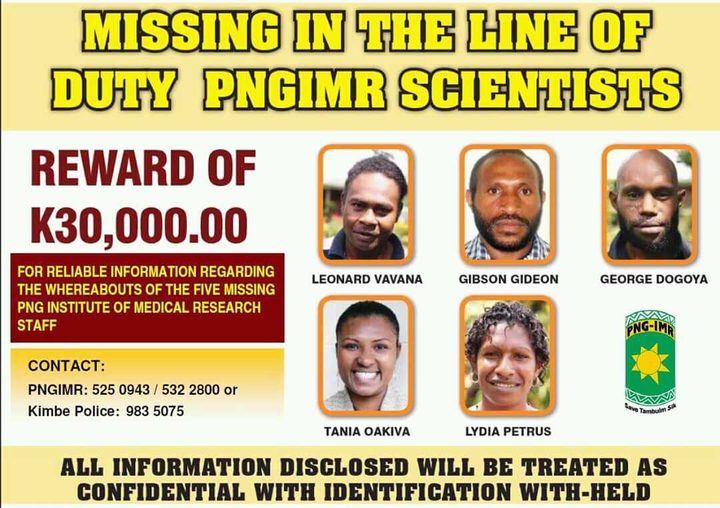 Reward poster for scientists who went missing in PNG in 2011 Photo: Supplied

Papua New Guinea police have closed an investigation into the disappearance of five scientists in August 2011.

The scientists were undertaking fieldwork for the Institute of Medical Research when they went missing off the coast of West New Britain.

Despite numerous searches, little trace of them has been found, although their boat was later thought to have washed up on the Sepik coast.

Police previously believed the scientists had been kidnapped, but have now closed the case.

The director of the Institute of Medical Research, William Pomat, said the coroner's report was also inconclusive

"So for the families we can't do much in terms of insurance because it's still inconclusive. The Police Commissioner responded about two or three weeks ago, saying that because there's no new evidence police can't put resources into it. It's still out there, and is something that we'll still try and pursue," he said.

Dr Pomat said the institute would not give up hope of finding out what happened to the five scientists who he said remained very much in the thoughts of family, friends and colleagues.

"Somebody knows where they are, so if the boat was found in East Sepik and bodies were found in Manus belonging to the crew then I think somebody will know where those five staff are," he said.