An amended Mining Act will mean a new mining company in Bougainville can offer the best deal to landowners, the president of the autonomous Papua New Guinea region says.

Bougainville is forming a company to open the controversial Panguna mine.

It will be called Bougainville Advance Mining (BAM) and a be joint venture with a newly established Australian entity, Caballus Mining, headed by West Australian Jeff McGlinn.

The president, John Momis, had placed an indefinite moratorium on mining at Panguna after landowners opposed the return of miner Bougainville Copper Limited (BCL). 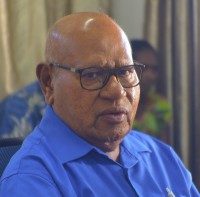 The landowners said BCL would not take responsibility for the environmental and social impacts of its previous operation.

BCL ran Panguna until the outbreak of civil war in 1989 in which grievances caused by the mine were central to the 10 year conflict that cost over 20,000 lives.

Mr Momis said the Autonomous Bougainville Government (ABG) and landowners would be permanent majority owners of the new company.

"Under the new, the amended law, the people and the ABG will automatically own 60 percent," he said.

"It's certainly the best deal for the landowners."