Pacific people who suffer from gout need to see their doctor for a simple remedy, a New Zealand academic says. 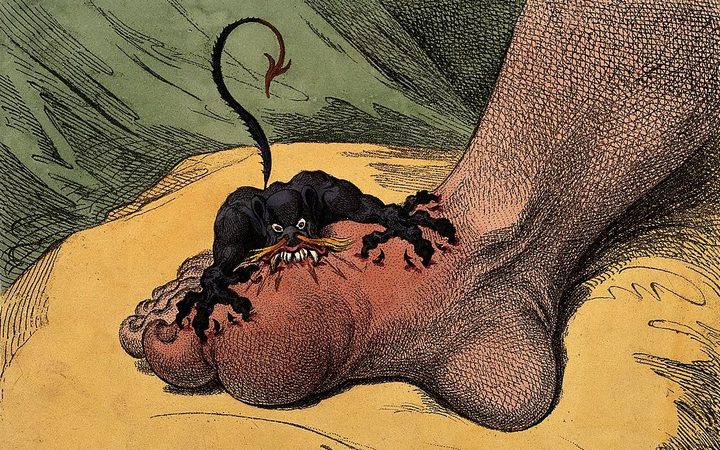 Gout is represented by an attacking demon in a 1799 etching by James Gillray. Photo: Wikimedia Commons

Fourteen percent of Pacific adults in New Zealand have gout compared with eight percent of Maori and four percent of Europeans.

Only a third of Pacific sufferers are on a managed gout-arthritis programme.

Otago University professor Tony Merriman said Pacific people had high uric acid counts in their blood which was a genetic advantage in fighting diseases like malaria.

However, the acid could turn into painful crystals in joints through reaction with certain foods, Dr Merriman said.

Anti-inflammatory painkillers used for gout can harm kidney function, he said, but another medicine is available.

"Really the way to treat gout is to get on the Allopurinol which slows down the production of uric acid in the blood, gets it down to the level of 0.36 and at that level the crystals won't form in your blood.

"Then you can have a beer, eat kai moana and not worry about gout attacks."