Hundreds of Papua New Guinea disciplinary forces officers are said to have descended on parliament in Port Moresby demanding payments they say they are owed for providing security at the APEC Summit. 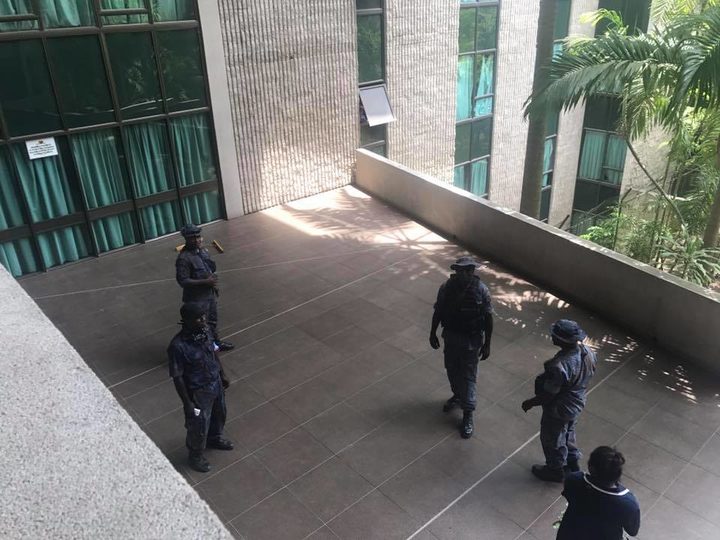 RNZ Pacific's correspondent in PNG Melvin Levongo said multiple police vehicles with armed police were involved. As well as correctional service officers, it's understood a small element of PNG's Defence Force may also have been involved.

They were demanding to speak with Prime Minister Peter O'Neill and APEC Minister Justin Tkatchencko about the extra money they say they were owed.

Mr Levongo said a policeman told him they were very angry at the government.

"You guys have got money to purchase Maserati cars but we are asking for our allowance so that's the situation currently at the moment," the officer said.

The unrest happened as MPs were converging on parliament to debate the 2019 national budget.

Photographs are circulating showing damage at parliament buildings including broken glass windows and doors for which PNG police are said to be responsible.

Madang MP Bryan Kramer's Facebook page shows hallways and lobbies that have been trashed and an image of startled shadow ministers whose meeting was interrupted.

The action followed a meeting earlier today between the police commissioner Gari Baki, the police minister Jelta Wong and members of the police, said Mr Kramer via Facebook.

"Over their concerns at not receiving their APEC allowances," he said.

"Following that dissatisfaction they then convoyed [to] and stormed through Parliament Haus."

Mr Kramer and other opposition members were in their shadow minister meeting as the security forces started destroying property.

In response to the actions of the disciplinary forces officers at parliament, the government has assured the officers that they would be paid.

A police spokesman Dominic Kakas says around 50 officers frm the constabulary were involved in the incident.

Mr Kakas put the action of the officers down to a misunderstanding about the non-payment of allowances.

He says the information he has at this stage is that the damage to parliament was minimal and and no complaints have been made about any assaults.

Meanwhile, a PNG cabinet minister has called for the resignation of the police commissioner Gary Baki over the incident.

Minister for Higher Education Pila Niningi said the rampage at parliament by law enforcers was unacceptable.

He told Loop PNG that there are proper procedures to follow over issues of outstanding payments.

Mr PnIningi called on Commissioner Baki, and the Acting Correctinal Services Commissioner, Stephen Pokanis, to resign over the unrest.