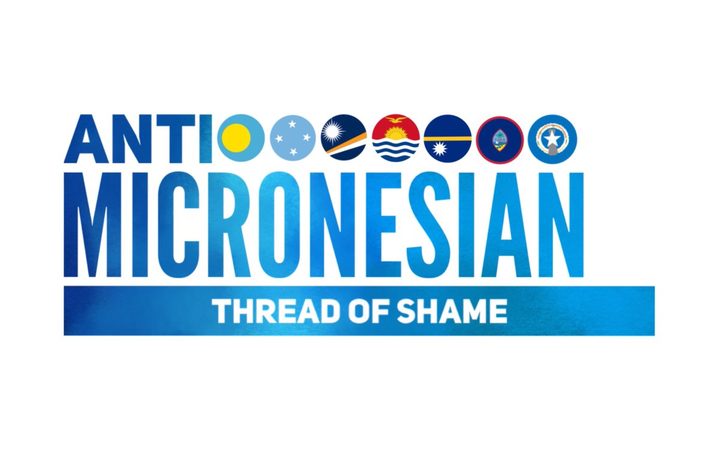 Sha Ongelungel, who is Palauan, started the "anti-Micronesian thread of shame" under the #beingmicronesian movement to expose the vicious attitudes towards her people who live in Hawaii.

The thread includes comparisons of Micronesians to cockroaches, posts about them being drunk, violence, promiscuous, and calls for them to be sent back to their home islands.

Me; Ew! I hate pidgeons!
Random Homeless guy on the side; Me too! They're like Micronesians!

Dear Mr. President, when will it be time for Micronesians to return to their homeland since peace has been achieved?

And she says the discrimination extends beyond derogatory jokes and online abuse.

"It's discrimination but at the same time it makes its way into policy, into housing issues, into education, into healthcare… and when that happens it's not just the way people keep describing them, it's not just jokes about an ethnic group, it becomes an actual problem of how are able to kind of live."

Sha Ongelungel said that while her movement has exposed such abuse, it has also created a sense of solidarity among the Micronesian community and others who support the cause in Hawaii.

"They've actually come across a lot of Micronesians who have become stronger and more powerful in their identity. Because in seeing what happens and what people this of them it has strengthened their resolve to be themselves."

She said bringing these issues to light has given young Micronesian people the chance to be proud of their culture, in the face of discrimination.

There are estimated to be about 15,000 Micronesians in Hawaii.

A journalist for Honolulu Civil Beat, Chad Blair says those who come from the Federated States of Micronesia, Marshall Islands and Palau have entitlements under the Compact of Free Association with the US, that are widely misunderstood in Hawaii.

He said while many do become homeless, many are also hard working people who are providing for their families.

"Check your prejudice at the door and when you see a Micronesian working at a Subway foodstore, or a SevenEleven, or a parking lot, or frankly, being your medical doctor or you lawyer or your teacher - ask them who they are, where they're from and get to know them.

"You know when someone sincerely shows an interest their faces light up and they want nothing more than to tell their story."

The US Commission on Civil Rights and the Hawaii Advisory Committee are holding a meeting this week to hear from members of the Micronesian community.

Mary Therese Perez Hattori, who is a professor at Chaminade University in Honolulu and originally from Guam, said she hopes it will provide the impetus for change at a higher level.

"What we share with them could actually show in a report that they'll send to congress and the President. So it could have an impact at federal level.

These venues for having our concerns heard at both the state and federal level are rare. So I think this is a very good sign."

Professor Perez Hattori said she also hopes having a chance the talk about their struggles will help future generations of Micronesians living in Hawaii.

"People are talking and we're trying to work in positive ways to focus our discussion. So while we're sharing concerns that do seem very negative, we are also focussed on what are the solutions and how can we move forward together in as harmonious way as possible."

Mary Therese Perez Hattori said it was important that future generations of Micronesians respect Hawaiian culture, but also become advocates for their own community and culture.