Lack of data on Papua region in a new report on shackling across Indonesia highlights the dearth of mental health services in the eastern-most provinces. 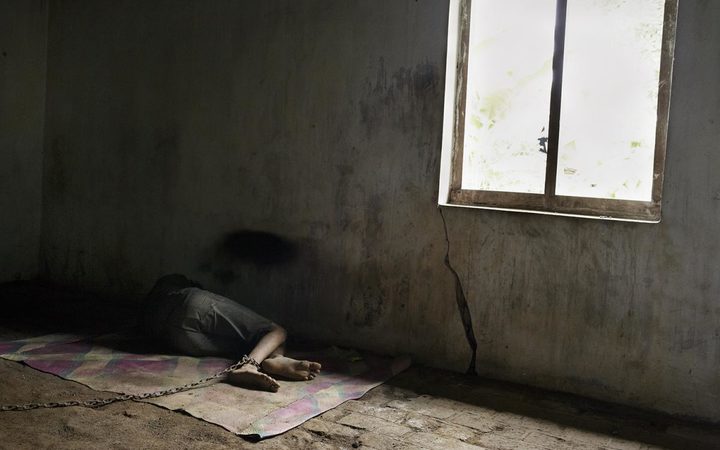 A man in shackles in Indonesia Photo: Human Rights Watch

When its research began two years ago, the NGO found that 18,800 people with mental health conditions in Indonesia were shackled.

It said the number has since dropped to 12,800, as Indonesia's government has taken important steps to end shackling.

The NGO's disability rights researcher, Kriti Sharma, said it was telling that the government had no data on shackling from Papua.

"When we started the research we found that Papua and West Papua (provinces) were one of the areas where there was a real dearth in mental health services.

"The data is collected through grassroots community workers, and in the absence of those networks, they are unable to collect data," she explained.

In the absence of data, Ms Sharma admitted it was difficult to come to conclusions about the state of people with mental health conditions in Papua.

"But what we do find is as soon as there are no services where access is difficult, where there's a lack of mental health professionals, families do resort to shackling, and that's what I fear for Papua."

The practice has persisted in Indonesia despite a 1977 government ban on shackling, which the NGO said was because of stigma and the lack of community-based support or mental health services.

However, Human Rights watch has credited Indonesia's government with making serious efforts to counter shackling and the lack of community-based mental health services.

By the start of last year, the Health Ministry rolled out a community outreach programme in which health workers use a "family-based approach," going house to house to collect data, raise awareness, and provide services relating to 12 measures of family health, including mental health.

As of last month, the programme had reached 16.2 million - around 25 percent - of households across the country.

The data collected indicates, however, that only 16 percent of people with psychosocial disabilities surveyed have access to mental health services.