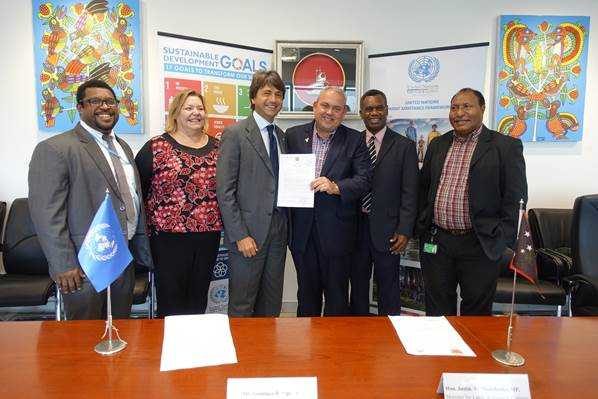 Papua New Guinea's government has presented the United Nations with a land lease for its new office complex in Port Moresby.

The 99-year Special Purposes Lease gives the UN the right to build UN Haus on land allocated in the Waigani precinct.

The land on which the office complex will be built is in close proximity to the government offices and development partners.

The UN described the issuance of the Lease as a milestone for its various agencies, funds and programmes in PNG.

It says it further strengthens the partnerships to achieve the national development priorities through a collective commitment to the Sustainable Development Goals.

"We work with people to utilize the land for long term development, it is our responsibility to make sure that it is done correctly and properly for the benefit of everyone," said Mr Tkatchenko, adding that he was "sure the UN will build a nice iconic building".

Thanking the government, Mr Rampolla said the lease "symbolises the strength of the partnership between the UN, the government and the people of Papua New Guinea".

"The Green UN Haus will be designed to aesthetically reflect elements of both PNG traditions and modernity, providing for a new land mark in Port Moresby.

The Green UN Haus will be built under a public-private partnership model, and according to Mr Rampolla will allow important cost and energy efficiencies.

"We will make use of indigenous materials, environmentally-friendly systems, conservation of water, natural lighting, and recycling."