Eight of the 47 passengers and crew on board the Air Niugini plane which crashed into a lagoon in the Federated States of Micronesia have been injured. 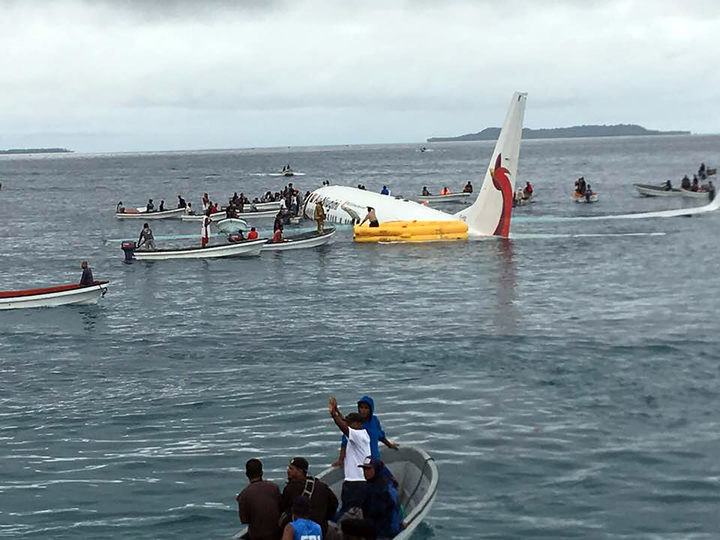 Flight PX73 was making a scheduled stop at Chuuk International Airport on the way from Pohnpei to Port Moresby on Friday, September 28.

The Boeing 737-800 was on final approach in very poor weather according to the airline.

At 10:10am local time the plane crashed short of the runway into the lagoon in heavy rain and reduced visability the airline said in a statement.

The plane later sank in the lagoon after passengers and crew were evacuated to Chuuk's main island of Weno.

An airline spokesperson confirmed that eight people on board were injured but would not reveal the extent of their injuries.

It is believed the injured are all passengers as the airline has said hotel accommodation had been arranged for 27 Passengers and 12 crew.

Air Niugini has confirmed there were 35 passengers and 12 crew on board.

The aircraft was configured for 158 passengers in two classes.

The airline spokesperson told RNZ Pacific a special flight has been scheduled to take company personnel to Chuuk on Sunday, September 30 and will include a doctor to attend the injured.

The special flight will return the same day with those passengers who wish to complete their travel to Port Moresby or beyond.

The nationalities of passengers have not been released but Air Niugini confirmed embassies and passenger representatives have been notified.

This Boeing 737-800 crash in the Federated States of Micronesia follows the loss of a 50-seat Dash-8 aircraft which was torched by an angry mob in the PNG Highlands in June.