Solomon Islands go into the semi-finals of the Oceania Under 16 football Championship as the team to beat, having upset pre-tournament favourites New Zealand in pool play. 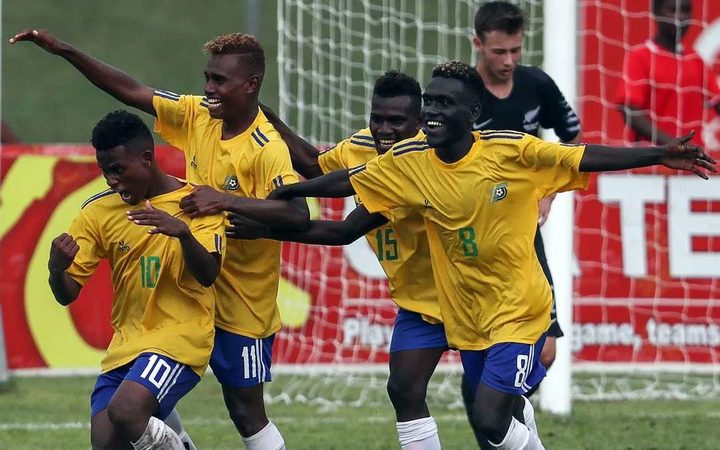 Home advantage is just one factor in the Solomons' favour, as evidenced by 3500 excited fans filling Honiara's Lawson Tama stadium last Wednesday to watch the home side thrash the New Zealanders 5-0.

Size, speed and power were their other clear advantages with the New Zealanders having no answer in the Honiara heat.

"It was a nice win for us, I think it was a big win, a massive win," said the Solomons coach Stanley Waita.

"I give credit to my boys, they have done well. They followed instruction and did what I told them to do."

"I think it will be a game we won't forget and a tremendous learning experience for the boys against a really powerful attacking team that's pretty relentless," he said.

"We'll have to recover, do our homework... hopefully that will kick us on for the rest of the tournament."

The New Zealanders only just managed a 4-3 win against Papua New Guinea (PNG) in their final pool game on Saturday to cement second place in Group A and a semi-final berth.

The Solomons had previously thrashed PNG 5-0 and racked up the same score against Vanuatu on Saturday to top the group. In the next round, they face the second placed team from Group B, Fiji, who booked their ticket to the knock-outs with a narrow 1-0 win over New Caledonia on Sunday.

"We talked about it, that they would come out firing because that team loves attacking so we were very cautious about what to do in the backline and midfield," Dutt said.

In pool play, Fiji were beaten 3-0 by Group B winners Tahiti, who finished with a 5-1 flourish over Samoa on Saturday before their semi-final against with New Zealand.

History suggests the French Polynesian team will have their work cut out to prevent another showdown between Solomons Islands and New Zealand in the grand final.