The new UN human rights chief has described Australia's offshore processing centres as an affront to the protection of human rights.

Michelle Bachelet included criticism of the centres on Nauru and Manus Island in her maiden speech at the Human Rights Council in Geneva. 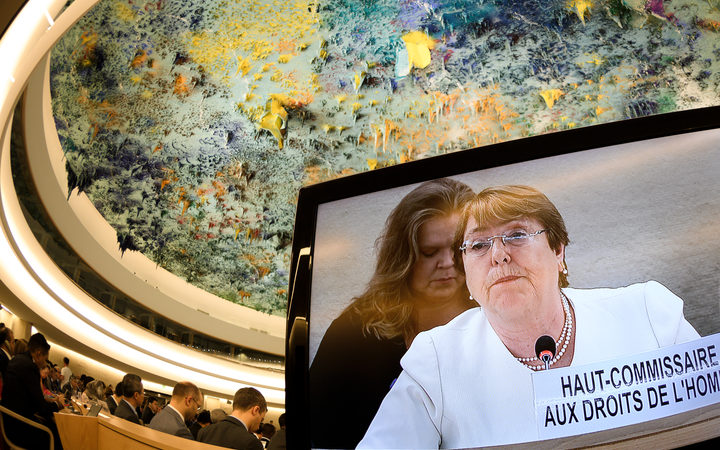 New High Commissioner for Human Rights Michelle Bachelet is seen on a TV screen delivering her speech during the opening day of the 39th UN Council of Human Rights in Geneva on September 10, 2018. Photo: AFP or licensors

The former president of Chile said the council had a responsibility to speak out against human rights violations without fear or favour.

She focused on migration in her address, saying an international agreement due to be signed this year provides for regional and international cooperation to set up prompt and humane reception for all arrivals.

"The Global Compact for Migration, which is due to be adopted in December, offers hope for better and more effective governance of migration," Ms Bachelet said.

"It is a balanced human rights document with achievable, detailed policies to reduce the vulnerability of many of the world's 258 million migrants - and minimize the human rights violations which so often drive their flight.

Ms Bachelet urged Australia not to withdraw from the Compact, as it has suggested, saying Canberra should revise the country's policies for people arriving at its borders without a visa.

"The decision by the United States and Hungary to refuse to sign the Compact is deeply regrettable," she said.

"Australia, a member of this Council that has suggested it might withdraw, should join the consensus of the global community, adopt the Compact and revise the country's policies with respect to people arriving at its borders without a visa. The current offshore processing centres are an affront to the protection of human rights."