The Papua New Guinea Hunters rugby league team can all but seal their spot in the Intrust Super Cup playoffs with a victory over Wynnum Manly Seagulls, in what's likely to be their final home match of the season.

The defending champions are on a five match winning streak and currently occupy the final top sixth berth with two round left in the regular season.

The Hunters have won nine of their 11 matches in PNG this season and coach Michael Marum says there's plenty of motivation to sign off in style for their home supporters.

"(It's the last) Last home game. Last year we also played them around this time and got the minor premiers so this time we are fighting for a spot in the top six so it's going to be a big game for us," said Marum. 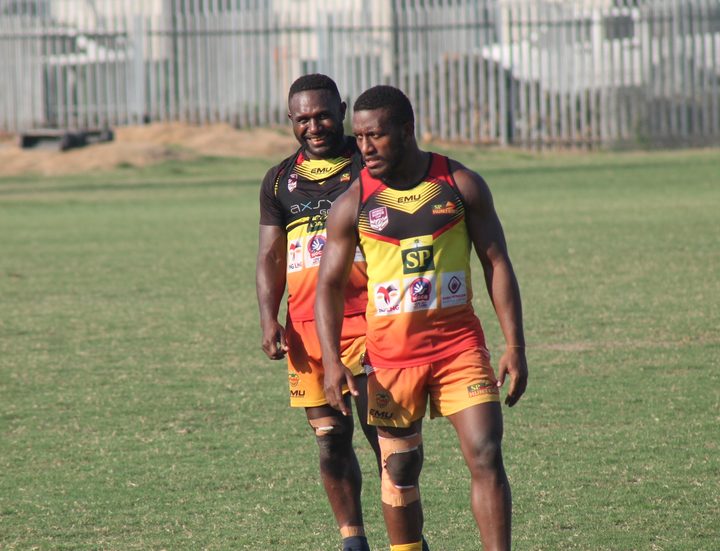 Brothers Ase and Watson Boas will be directing the Hunters from the halves. Photo: Supplied/Melvin Levongo

The Ipswich Jets and Norths Devils just one win adrift of the Hunters on the competition ladder.

"We take the two points when we can, if the penalty is in front so if that's kicking range we're making use of this ability to kick goals. Two points also is important for us," he said.

Last weekend Tweed Heads didn't convert three tries and we converted I think three and we won the game by four points so some stages we need to build pressure and we go for the tap but in front of the points we always go for that two points."

If results go their way the Hunters could climb as high as fourth, with Northern Pride hosting top of the table Redcliffe and fifth placed Easts Tigers at home to Souths Logan Magpies.