The Nauru government should expect scrutiny of refugee camps on the island when overseas journalists visit for the Pacific Islands Forum, a human rights watchdog says. 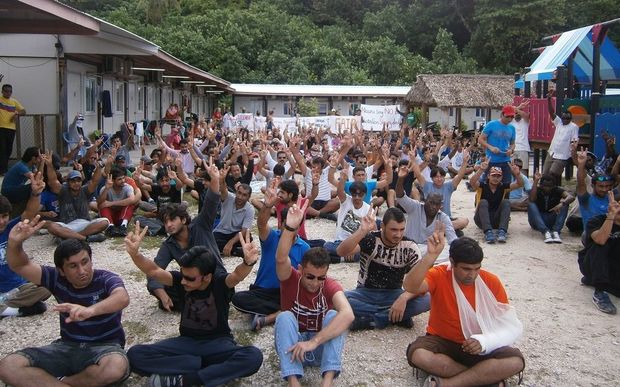 Refugees on Nauru protesting on 7 April 2015 at Anibare camp against offshore processing in defiance of a new law that requires protesters to give seven days notice of any protest and gives the police commissioner sole power to allow a protest, or not. Photo: Supplied by Refugee Action Coalition

The forum is holding its annual leaders meeting in September on Nauru, which has removed a hefty visa application fee for journalists to cover the event, although it has restricted numbers and banned the ABC.

Elaine Pearson of Human Rights Watch said only a handful of journalists had been allowed into Nauru in the five years since Australia introduced offshore processing there.

The journalists going this year should tell the stories people want to hear, she said.

"So I think the Nauru government should expect that journalists will want to cover that story and they shouldn't be trying to hide the scrutiny from journalists," Ms Pearson said.

"Now is the time to be transparent about this policy and let journalists talk to refugees and make up their own mind."