The 28 year old played for the Redcliffe Dolphins last season and had signed a two-year deal with the Ipswich Jets but visa issues forced him to return to PNG.

The Kumuls international was an inaugural Hunters player in 2014 and says he's happy to be back after a year away.

"I text (head coach Michael) Marum but he said you have to play Digicel Cup and get some match fitness so I went back to Digicel Cup, played for (Port Moresby) Vipers and when Michael Marum called me I was so happy. I'd been missing out for a while so yeah it's good to be back with the Hunters." 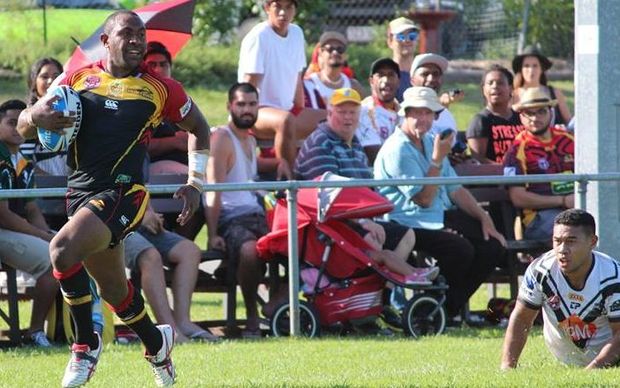 Thompson Teteh is back for a second stint with the PNG Hunters. Photo: SP PNG Hunters

Thompson Teteh will renew his partnership with the fit-again Willie Minoga in the centres against Wynnum Manly tomorrow, while captain Ase Boas also makes a welcome return from a knee injury in the halves.

"I won't do anything special but I think everyone has to play their part because it's...team work. I'm going to stick to my role and I'll play my role but as a senior player I'll step up and try to lead on and off the field."

The Hunters have won just two game this season and are bottom of the 14-team ladder after nine rounds.

Coach Michael Marum says they've used the bye week to examine what has gone wrong and now it's time to deliver.

"I felt a little bit sorry for the younger boys who came through seeing that the experienced players in the side haven't taken the lead, so we sat down all together as a team and we had a look at what we can do together, but everyone has to play their part in there - the senior boys and the (new players)."

Michael Marum says the players have been set new fitness targets as they look to revive their season and stay in the playoff race.

"We put the results in front of them and explained what we want out of them in the next two weeks but if we can start well this weekend there's plenty of games remaining. We've had a record in the past where we won 17 games straight on the road so I'm sure we can do that but we focus on one game at a time."