A beaten up sofa sits on the river bank, a tangle of muddy clothes and battered utensils on top.

Nearby is Mohammed Shamim's house - or what's left of it - all flapping bits of tin, ripped boards, cupboards without doors and windows without glass.

Heaps of uprooted trees, silt and rubbish lie dumped alongside.

Mr Shamim and his family were left with next to nothing after the creek swelled into a raging torrent during this month's back-to-back cyclones and heavy rain.

"We suddenly woke up when we see the water all around our house," he said.

"See? All the rubbish there inside the house and the household items all gone in the river." 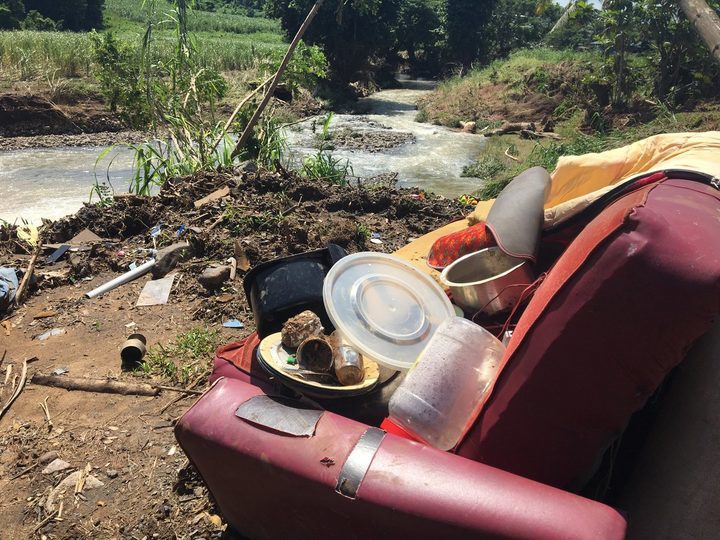 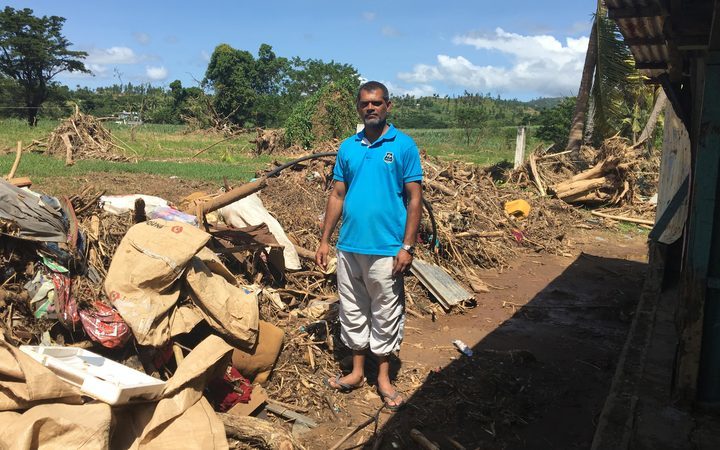 Mohammed Shamim stands by his house near Ba which was devastated during April cyclones. 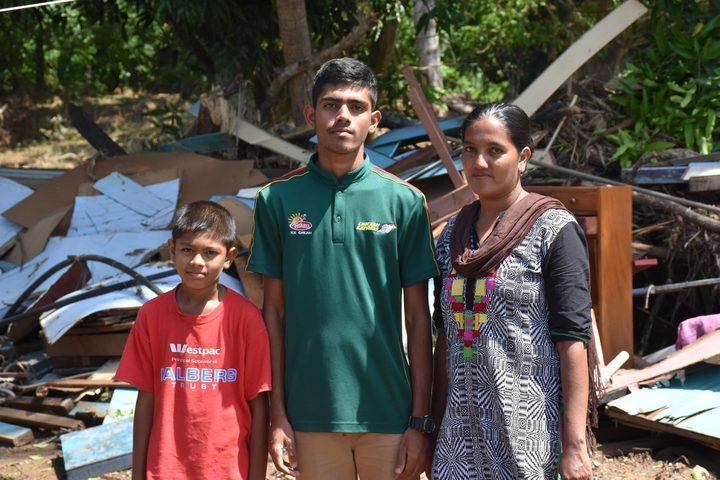 Members of the Shamim family stand in front of the debris from their house, ruined in the April 2018 floods in Fiji. 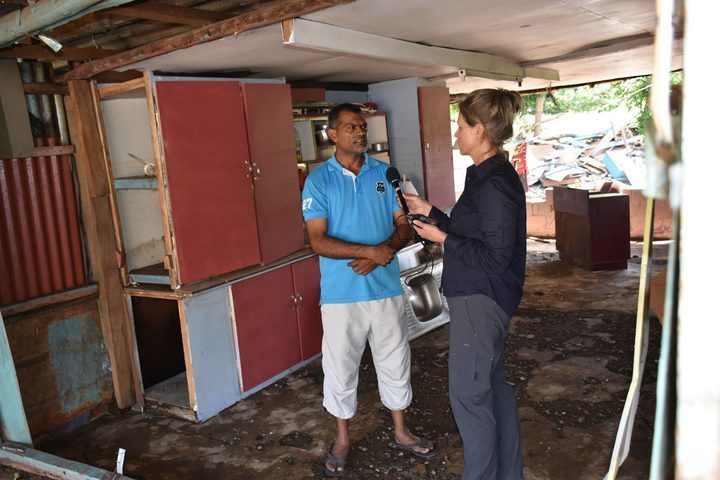 Mohammed Shamim being interviewed by RNZ Pacific's Sally Round. 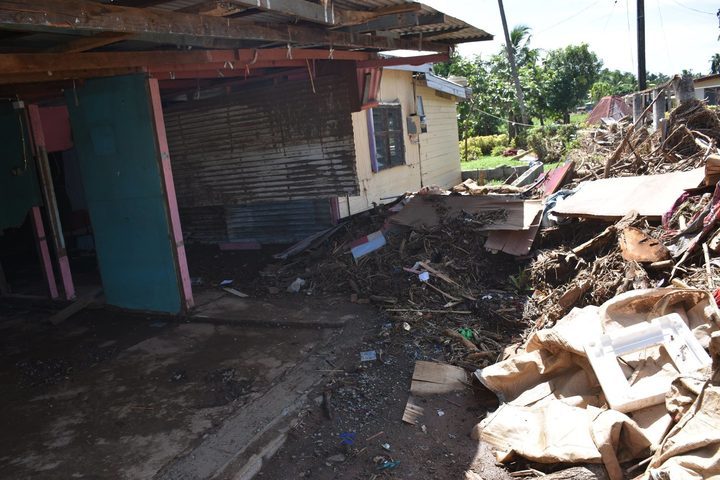 Mohammed Shamim and his family were taken by surprise when a wall of water carrying huge logs and a mass of mud slammed into their house near Ba, Fiji. 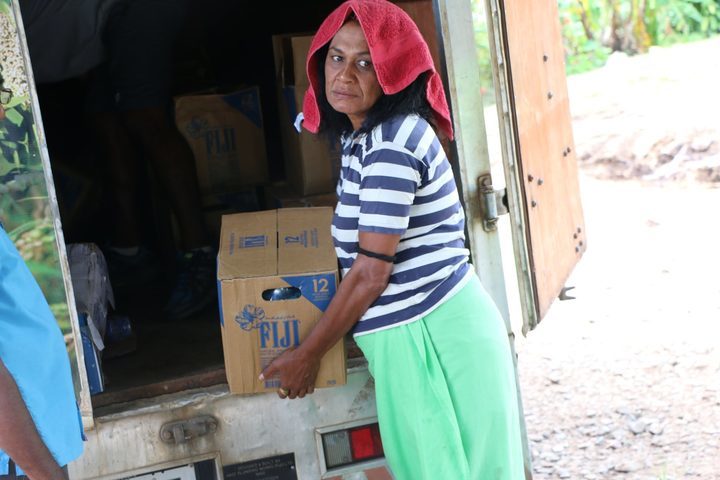 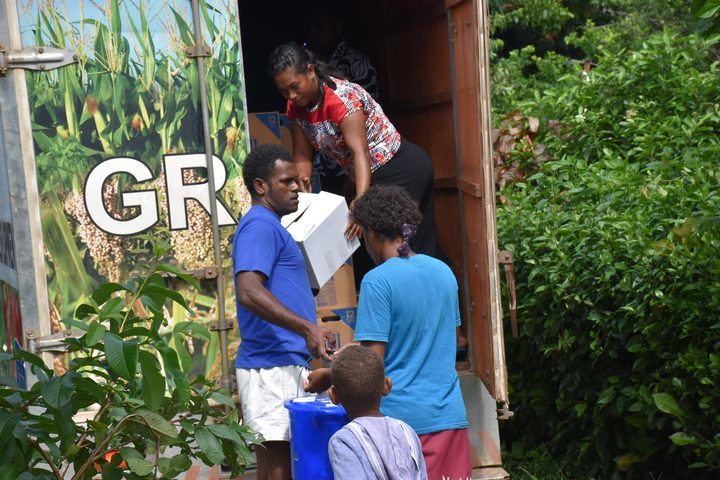 The Shamims, who live in a settlement on the outskirts of Ba in Fiji's west, are among an estimated 150,000 people in Fiji who were affected after homes were drowned or crushed and towns were inundated in the spate of bad weather.

They had not felt the need to leave for one of the evacuation centres in the area as the creek had never flooded before.

Still, they kept watch over the waterway but were taken by surprise when a wall of water carrying huge logs and a mass of mud slammed into the other side of the house.

Luckily it was daytime and the family got out with five minutes to spare.

Nearly two weeks after the catastrophe, the Shamim family were just managing with help from friends, family and neighbours.

"Food and water, we got it. Some people bring the rice. Some of the family, friends and organisations, small organisations. They come and they help us."

A climate change and disaster management official for the western region, George Dregaso, said the intense weather of the last month along the north-western side of Viti Levu had challenged the authorities in terms of mobilising resources.

"Usually in Fiji we receive an average of 300mm to 400mm in a month during this wet season but now within days you can receive that rainfall," Mr Dregaso said. 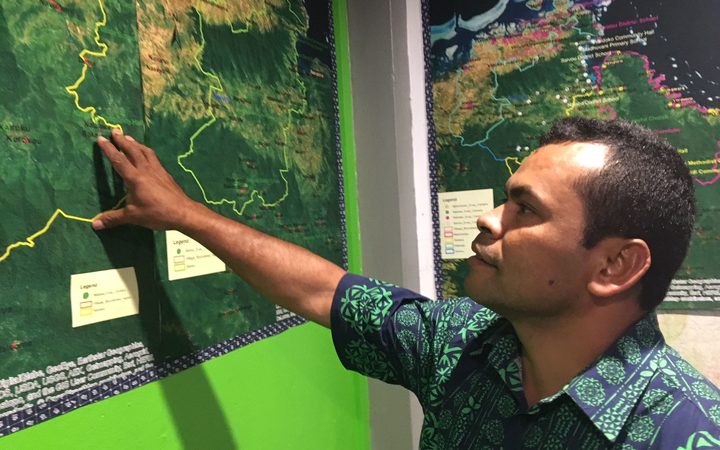 The frequent floods had made roads and bridges impassable for the vehicles carrying relief supplies which were headquartered in Lautoka but he said they had eventually managed to get aid through, although more was needed.

A plan was underway to build new pre-stocked evacuation centres in the west's main towns of Nadi, Rakiraki and Ba to cope in future, he said.

Fiji's prime minister, Frank Bainimarama, warned this month that Fiji is now at an almost constant level of threat from extreme weather for which he blamed climate change.

"While as a nation, we are striving to build our resilience and adapt to the frightening new era that is upon us, Fiji is also doing what it can to address the root cause of these events through our leadership of the global climate negotiations, COP23," he said in a speech.

Deforestation, poor forest management and drainage were also to blame for the unprecedented flooding, according to Sashi Kiran, the director of FRIEND, a local charity helping communities in the west.

"We saw creeks and even rivers changing direction, taking over homes, which they never had. Somebody needs to take a study and really look at where did all that water come, why did the banks break, what's happening in the upper hills? What drainage system has changed? Are there man-made factors?" she said.

She said a state of emergency should have been declared in the badly hit area of Ba after Cyclone Josie.

"The basic of water was not available for four to five days and we fear communicable disease outbreak.

"People were in dire need and most organisations are not able to mobilise and assist unless there is a call from the government or there is an emergency declared." 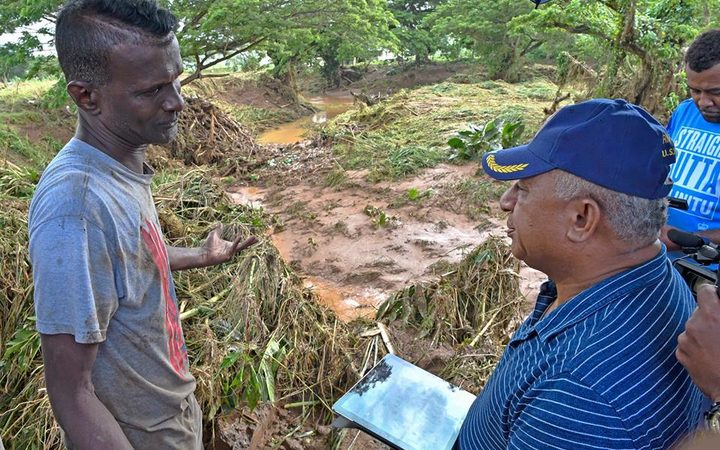 A World Bank report last year reported by 2050, 32,000 people in Fiji would be pushed into hardship every year by extreme weather.

At the weekend Mr Bainimarama announced a relief package for those with damaged homes, farms and sugar cane fields, and extra payments for those on social welfare.

Mohammed Shamim and his family could become another statistic.

"We're left with nothing. Back to zero," he said.