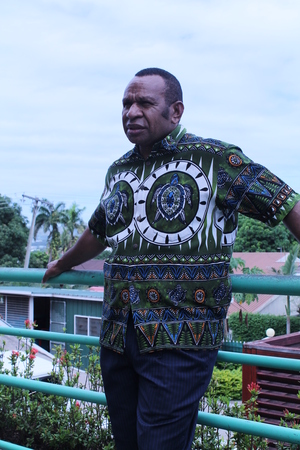 A high profile Papua New Guinea leader has denied claims he is evading court over a contempt case.

Belden Namah, the MP for Vanimo, was responding to local media claims that he's facing an arrest warrant.

The Prime MinIster Peter O'Neill has sought a Supreme Court warrant for the arrest of Mr Namah for allegedly evading service of court documents.

Mr O'Neill accuses Mr Namah and four other opposition MPs of publicly discussing a court matter involving him when the matter was yet to be determined.

But Mr Namah, who is currently suspended as an MP pending a Leadership Tribunal matter, said he was willing to go to court when served the papers.

"I haven't been evading it at all. I've given instructions to one of the lawyers to represent me in court. Whether he's been attending the court matters, that I'm not sure of. This contempt of court, I was not aware of the dates for me to appear. But I've not been personally served with the papers."

"From what I'm reading, the Chief Justice has called for the matter to be adjourned to tomorrow," he said.

"I will personally appear before the Chief Justice tomorrow, to do the right thing, and to tell the court I haven't been served those documents myself."

Headlined 'Arrest warrant for Namah', the article was misleading, according to Mr Namah, since there was not an arrest warrant in place.

Mr O'Neill's lawyer made the application for an arrest warrant yesterday before Chief Justice Sir Salamo Injia, sitting as a one-man Supreme Court in Port Moresby.

But Sir Salamo found the application "possibly premature", saying it should be brought before a full court at the trial stage of the substantive matter and not at directions hearing.

"I'm really disappointed with the way the Post Courier has put it, like there's an arrest warrant for me already," said Mr Namah.

"It's really misleading.. I'm looking at the legal options to take Post Courier to court. It defames somebody and it destroys somebody. When a person looks at the front page, it's a different perception altogether."