Most of Fiji has escaped the worst of Tropical Cyclone Gita, but contact with Ono-i-Lau and Vatoa - potentially the worst hit - will not be restored until tomorrow. 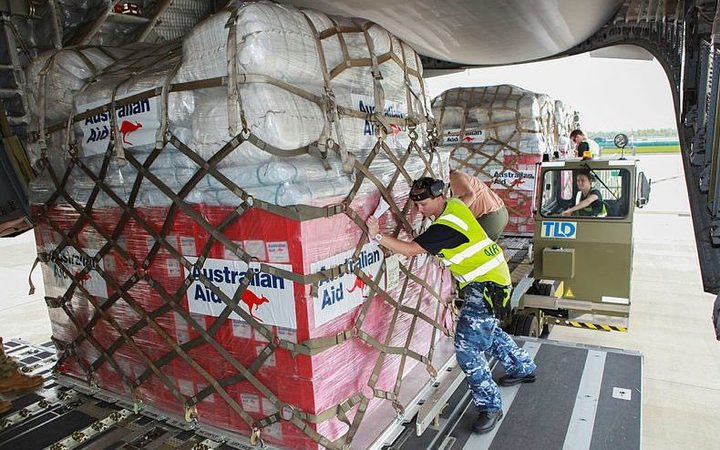 Aid is being delivered to the Pacific after the destruction wrought by Tropical Cyclone Gita. Here Australia's Defence Force is carrying seven pallets of humanitarian aid to Tonga. Photo: Twitter / @AusAirForce

Ono-i-Lau and Vatoa, in the Southern Lau island group between Fiji's main islands and Tonga, are believed to have suffered from gales, heavy rain and coastal flooding.

Fiji Red Cross head Filipe Nainoca said communication with those islands has been lost and authorities said it would not be able to be restored until Thursday.

The low-lying atolls are at particular risk of storm surges.

Fiji's met service said Gita's centre was located 200km south of Matuku, gusting at 250km/h at about 3.30am NZ time.

A strong wind warning remained in force for all of Fiji, it said, although the cyclone warning for the islands was cancelled about 10pm yesterday.

Pacific Red Cross spokeswoman Hanna Butler said getting communications back up would be a priority.

"They're a remote group of islands halfway between Fiji and Tonga, there's a small population living there but we still need to get in touch with them pretty soon to see how they are and what's happened," she said.

Ms Butler said there was rain and wind in Suva overnight but nothing out of the ordinary.

While Cyclone Gita had passed further south than expected, avoiding much of Fiji, Ms Butler said they were not out of the woods yet.

"We saw a couple of years ago with Cyclone Winston, as she was up above Tonga turned a full circle and came back to Fiji, so we're still watching things very closely," she said.