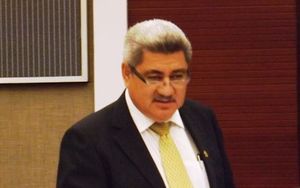 Samoa's Supreme Court has reserved its decision regarding an appeal by the former deputy prime minister against his conviction.

Lauofo Fonotoe Pierre Lauofo was convicted on a charge of obstructing the police in May 2014, when he was caught drunk driving.

Lauofo, who remains a member of parliament, is appealing against the conviction, alleging errors in the facts of law and inconsistencies in the evidence presented.