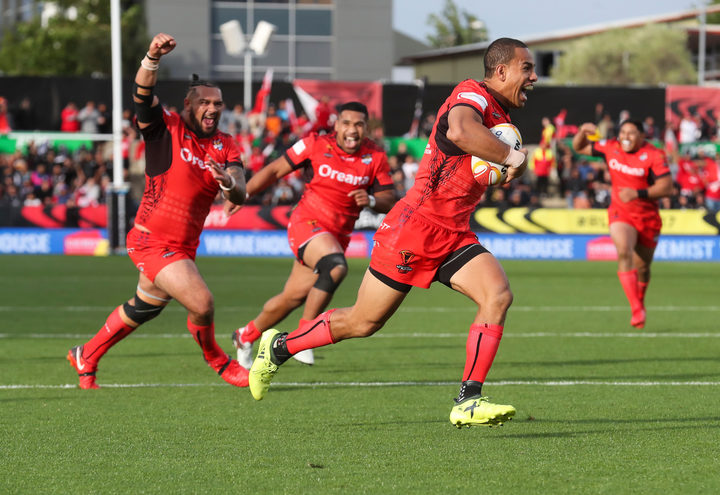 After a devastating second-half surge cheered on by a sea of red in Hamilton, Tonga have beaten New Zealand 28-22 at the Rugby League World Cup.

It is the first time Tonga have ever beaten the Kiwis, a fact not missed by the thousands of supporters who lingered long after the full-time whistle to cheer on their victorious team and sing praises.

Video showed the Tongan capital at a standstill, as residents spilled into the Nuku'alofa dusk en masse to celebrate on the streets. Cars crawled in convoys, tooting their horns and blaring music as people waved and cheered the victory.

Tonga have just made history becoming the 1st Tier Two nation to beat a Tier One nation in Rugby League
Ouaaaaaaaaaaa!!! pic.twitter.com/T83l7OHNz6

But for much of the game, such a win seemed unlikely. New Zealand at one point led 16-2.

But in the second-half, New Zealand buckled and Tonga surged in thrilling fashion, spearheaded by a rampant David Fusitu'a, who scored three tries before a highly-charged crowd.

The Kiwis sought to claw the game back when Roger Tuivasa-Sheck light-footedly danced through a Tongan defence for his second try of the match, late in the second-half.

But Tonga dealt the final blow, when Fusitu'a completed his hat-trick with three minutes to go.

"We come from a little nation, and although I wasn born in Tonga, my parents are there and I'm very proud of where I'm from," said Fusitu'a after the game.

Not only was Saturday's game Tonga's first ever win over the Kiwis, it also made Tonga the only second-tier nation to have beaten one of league's three top-tier teams (New Zealand, Australia or England).

Both teams had already qualified for the World Cup quarter finals, but Saturday's victory improved Tonga's chances immensely - they now avoid Australia in the up-coming playoffs, instead playing Lebanon.

New Zealand, however, will face Fiji in Wellington. If they win that, they will meet the Australians - the tournament favourites - in the semi-finals.