It was third time unlucky for Manasseh Sogavare on Monday night as he was ousted as the Solomon Islands prime minister in a vote of no confidence.

Mr Sogavare's third stint as prime minister was his longest, and he came tantalisingly close to that elusive goal in Solomon Island politics: a full term in office.

However, 10-months out from elections he was politically wounded by recent defections by almost half his cabinet, and narrowly defeated by 27 votes to 23.

The vote followed six hours of arduous debate in parliament, kicked off by opposition MP Derek Sikua, who explained his reasons for moving the motion.

Dr Sikua said MPs had lost confidence in Mr Sogavare because he wasn't listening to them any more and had become suspicious of anyone differing from his point of view.

"Once he is fixated on a conspiracy his judgement ... inevitably becomes subjective to it," he told parliament. "My greatest sadness is that all too often, the prime minister sees it fit to lower himself to submit to advice from individuals with dubious character."

But the communications minister and Sogavare supporter Peter Shanel rejected claims that Mr Sogavare hadn't been consulting with members of cabinet.

He accused the ministers who defected of trying to hold the government to ransom over a personal grudge with the prime minister. 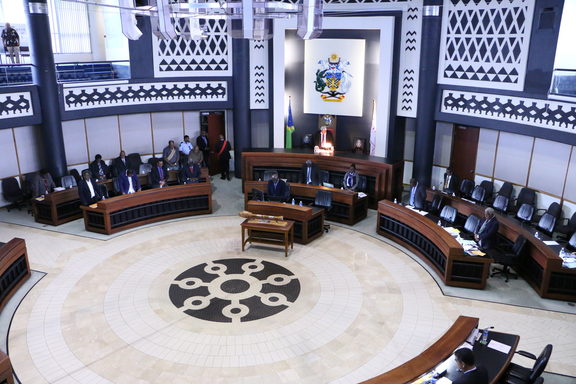 Mr Shanel and other supporters urged MPs to let the prime minister finish the final ten months of his four-year term in office.

But the East Honiara MP, Douglas Ete, said time had run out for Mr Sogavare. Citing shortfalls in health, education and general development around the country, he said they had no option but to support the motion.

"Ten months is too much time, [it's] enough time to destroy this nation. So my question is what has the government done?," asked Mr Ete. "We all must take the blame for it ... we have to go back to the drawing table and rewrite it."

In the end a slim majority of MPs voted to remove Mr Sogavare. 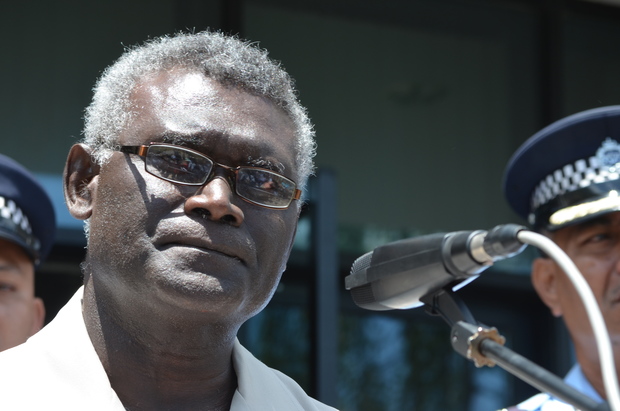 Manasseh Sogavare on the steps of parliament after he was declared prime minister in 2014. Photo: RNZI

The vote brought around another prime minister's downfall in yet another no confidence vote. Since independence in 1975, only one prime minister has managed to serve a full term in office.

For Mr Sogavare, Monday marked the end of his longest term as prime minister.

His first term was in 2000, when he was installed as prime minister after Bartholomew Ulufa'alu was captured by rebels and forced to resign in an effective coup at the height of the country's ethnic conflict. However, his party failed to gain any traction in elections the following year.

His second stint came in 2006, when Snyder Rini was forced to resign after riots in Honiara. This time, his term was in the middle of the Australia-led RAMSI intervention, of which he -- at the time -- was a critic. Mr Sogavare expelled the Australian High Commissioner and engaged in a public spat with the Australian government. He was eventually defeated in a no-confidence motion in December 2007.

Mr Sogavare started his latest term after the 2014 elections, when he promised to revive the country's economy and work to eradicate corruption. He would also oversee the withdrawal of RAMSI, which he now considered "a divine intervention."

He would last three years.

The parliament is expected to convene later this week to elect a new prime minister. The opposition grouping hasn't declared a candidate yet - there is understood to be several MPs preparing to put their name forward.