The facade of Papua New Guinea's parliament before a lintel of anthropomorphic carved heads was removed in 2013. Photo: RNZ / Johnny Blades

The former Speaker, Theo Zurenuoc, had ordered the removal of nineteen carved heads from parliament's facade after claiming they were "evil and ungodly".

His campaign to "reform and modernise parliament" as a Christian institution prompted a public outcry and claims of cultural terrorism.

But Mr Zurenuoc lost his seat in the recent election, and his successor Job Pomat said the heads must be restored to the face of parliament. 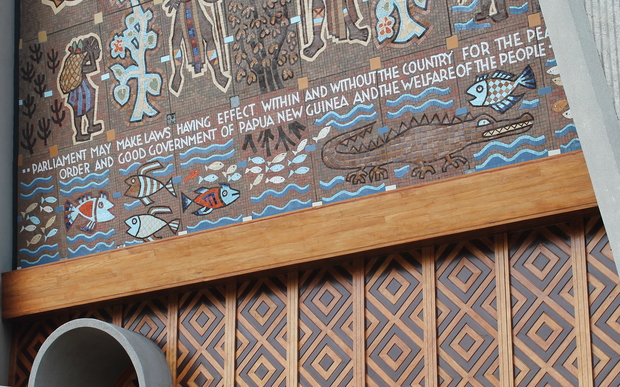 Without the carved heads, the facade of PNG's parliament wasn't quite the same. Photo: RNZ / Johnny Blades

He told local media in PNG that a national court decision from May last year directing the return of the carved heads, must finally be complied with. According to Mr Pomat, this also applied to a 10-metre totem pole removed from inside the parliament.

The Speaker wouldn't be drawn on whether some of the new additions that his predecessor had introduced to the parliament would stay.

Mr Zurenuoc, an ardent fundamentalist christian, argued that parliament's proceedings should represent the religious spirit that the country believes in, and not pagan or animist symbols.

The carved heads originally represented each of the provinces in the country at independence, although that number has since risen to 21.

They had been under the protection of the National Museum since being removed from parliament.