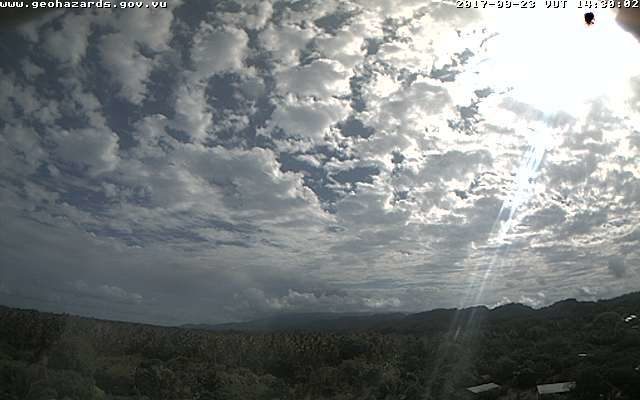 Authorities in Vanuatu were preparing to evacuate as many as 5000 people on Saturday, as a volcanic eruption on Ambae island continued to intensify.

The country's Geohazards Department on Saturday raised its alert from level three to four, what it classified as a "moderate eruption state."

The volcano is one of the most active in the world, but its activity has steadily increased in the past couple of weeks, said Esline Garaeviti, the manager of the Geohazards Department. On Saturday, that increased further, with the volcano belching ash across much of the 400sqkm island.

"In the early hours, around 3-4am, we noticed that the activity started to increase, followed by another eruptive phase," said Ms Garaeviti. "So the ash plume from Ambae is still there now. The ash fall is expected all around the island."

"The increased level of activity means increased area of risk," she said. "There's more risk exposed to people on the island, that's why. It's a moderate state of activity."

Ms Garaeviti stressed that the state of the eruption was only moderate, but there was every chance it could increase. However, authorities on the island, which sits between Santo and Pentecost about halfway up the archipelago, were swinging into action on Saturday.

Shadrack Welegtabit, the director of the Vanuatu National Disaster Management Office, said his officials weren't taking chances, and were preparing to start evacuating half of the island's 10,000 people from one side to the other.

"We are looking at moving people away from the south and north of the island, and moving them to the eastern and western part. We are working closely with the [Penama] Provincial Government on the ground arrangements," said Mr Welegtabit.

"It will be a big operation. We are talking about roughly 5,000 people that we have to move," he said. "Once all the ground arrangements is done in terms of preparing evacuation centres and stuff then we are looking at moving people. That is going to happen very soon."

"There has been a lot of ash fall in recent weeks, but as of last night there was a small eruption and people could see fire for the first time on that volcano," he said.

The last time there was a significant eruption on Ambae was in 2005, when a similar evacuation was carried out. It was as long as three months before people were able to return to their villages.

Both Ms Garaeviti and Mr Welegtabit said it was difficult to say whether the volcano's activity would intensify or start to settle down in coming days, but that every precaution was being taken.