Vanuatu have won promotion to division four of the World Cricket League with a six wicket victory over Italy in their division five semi-final. 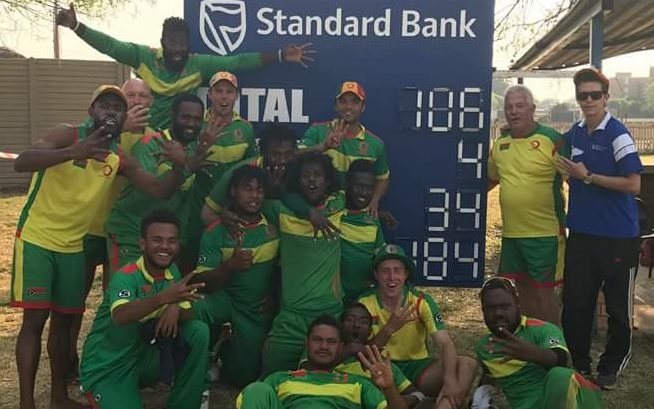 After scoring an unbeaten century against Germany in their final pool game at the tournament in Benoni, South Africa, Patrick Matautaava was again named man of the match for top scoring with 83 and taking two Italian wickets.

Italy lost the toss and were put into bat at Willowmoore Park but could only muster 183 runs before being dismissed in the 47th over.

In reply, Vanuatu chased down their target with 91 balls to spare.

"The first few games were probably a bit nervous and negative. We didn't want to play the Vanuatu/Pacific way but today and yesterday we decided that's what we had to do," said Deitz.

"Both openers Jonathan Dunn and Josh Rasu did a good job. Callum Blake had a bad tournament and then we gave him the new ball today and he got two early wickets," he said.

"The fielding was amazing it was a really good team effort."

Deitz praised the discipline of the "magic man" Matautaava, who he said showed restraint despite scoring at better than a run a ball.

"He's a special talent and hopefully he gets opportunities to play at higher levels in either Australia or New Zealand over the next few years."

The coach said winning promotion was Vanuatu's goal for the tournament as it assured them of international fixtures next year.

"It keeps everyone involved with cricket otherwise they'd get jobs and disappear from the game," he said.

"The boys played fantastic today under pressure today. A lot of the teams here aren't indigenous teams and all our boys are so it's been a fantastic win and a great thing for Vanuatu cricket."

In Saturday's final, Vanuatu will meet Jersey who defeated Qatar by seven wickets in the other semi-final.