Police in Solomon Islands have beefed up security in Honiara today for the second leg of the football World Cup qualifier against New Zealand. 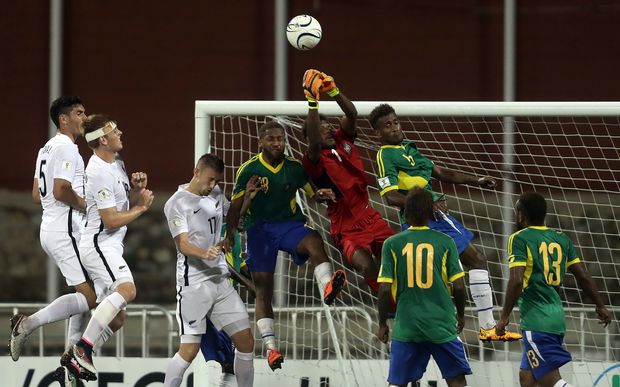 The All Whites take on the Solomon Islands in Honiara today. Photo: Photosport

The deputy police commissioner Gabriel Manelusi also called on the public to accept the result of today's game in the spirit of good sportsmanship.

The police operation which includes high visibility patrols in and around the capital as well traffic escorts for the All Whites, began yesterday and will continue up until their departure on Wednesday.

A 6-1 one thrashing at the hands of New Zealand during the first leg last week in Auckland means the Solomon Bonitos need to beat the Oceania champions 5-0 to move onto the next stage.

The winner of the tie will play the fifth-best South American team for a spot at next year's world cup in Russia.

Solomons coach Felipe Vega Arango lamented the obvious gap between his amateur players and the New Zealand professionals, and said if they could beat the All Whites it would be like winning the World Cup.

But despite the difficult task facing his team, Vega Arango said he was expecting fans to fill Lawson Tama stadium.

The New Zealand goal keeper Stefan Marinovic said despite their advantage in the tie the All Whites would not be holding back.

"We've given ourselves a good buffer but we all know how hard it is to go over to Honiara and play," said Marinovic.

"But there is a little bit of pride there I think. When you play for New Zealand you don't want to go there and scrape through. You want to set another example, play well and come away with a good win."

But the heat in Honiara could limit New Zealand's ambitions, according to the former All White Ben Sigmund.

"I remember playing thinking at half time, 'how am I going to get through the next 45 minutes?'"

"It is torturous. It's probably more a mental game than physical because you've got to tell yourself you're going to get through."