Papua New Guinea and the Australian Indigenous cricket teams could not be separated in their second 50-over match in Brisbane.

The Indigenous side romped to a 84-run victory in the first match at the weekend and posted a competitive 278 for 5 batting first in the follow up encounter at Peter Burge Oval yesterday.

Opening batsman Damon Egan carried his bat throughout the entire innings to finish unbeaten on 124, while Brendon Smith smashed a rapid-fire 70 not out from 52 balls down the order.

Mahuru Dai was the standout Barramundis bowler, taking 2 for 30 off his ten overs, while Chad Soper, Alei Nao and Damian Ravu all picked up a wicket each.

The PNG run-chase started badly with Tony Ura (0) and Lega Siaka (15) out early to leave the visitors in trouble at 32 for 2 after 5.3 overs.

Vani Vagi Morea (53) and captain Assad Vala (78) added a vital 91 runs for the third wicket to revive the Barramundis run-chase but Morea and Sese Bau (0) were dismissed in quick succession, leaving the tourists delicately placed at 124 for 4. 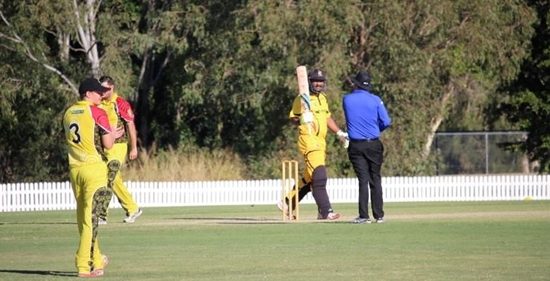 Mahura Dai joined captain Vala at the crease and chipped in with 43 runs before three quick wickets reduced PNG to 217 for 7 in the 42nd over.

However former captain Jack Vare-Kevere (32) gave the Barramundis a fighting chance before an unbeaten 19 from Chad Soper helped them draw level at 278 for 9, earning an unlikely tie.

Interim Head Coach Jason Gillespie said he was happy with the overall improvement shown by the PNG team.

"It was a great match that ended in a tie with an improved performance in most areas by the Barramundis," he said.

"There were some good lessons that we can take into our next game. Our opposition showed us that with two set batsmen going into the last 15 overs of the innings can really push your innings forward.

"Also, a number of our batsmen got starts but we needed one of them to get to three figures today. It was a very good fielding performance by our boys as well."

PNG's next tour match is on Friday against Cricket Australia's National Performance Squad in Brisbane.