For three years, the people of Kwa village have been living in the isolated, swampy grassland of April Valley, trying to build a life with, they say, little assistance from a government that promised to help. 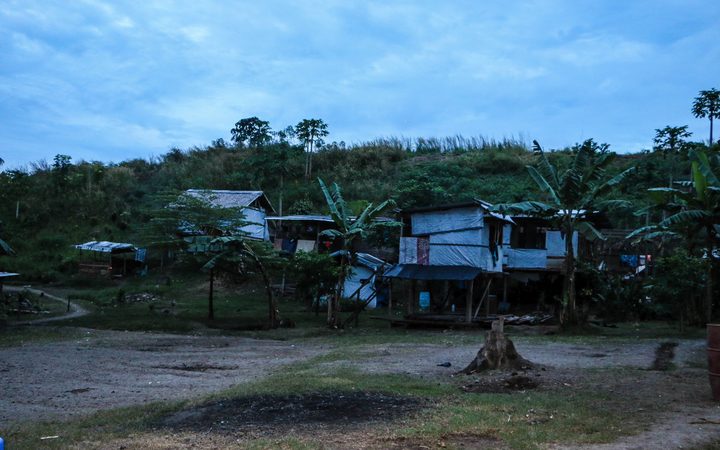 One of the houses created by settlers in April Valley, east of Honiara. About 100 people were resettled here after devastating floods in 2014. Photo: RNZ / Koroi Hawkins

Those promises came amid the rush of sympathy that followed devastating floods in Honiara in May 2014. The Mataniko River burst its banks following weeks of torrential rain, spilling into the Kwa village and destroying everything. 21 people died and hundreds were left homeless. 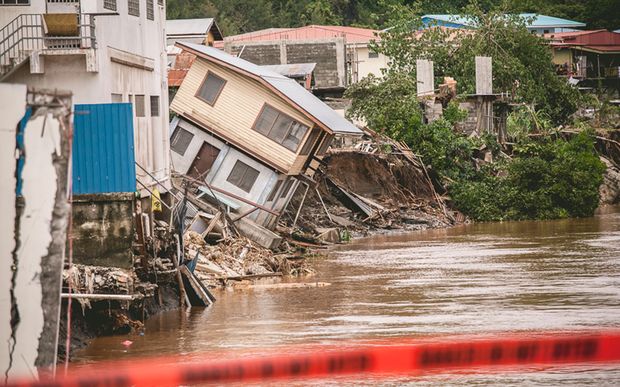 The April 2014 floods in Honiara devastated the Kwa settlement, which has since been abandoned. Photo: AFP / World Vision / Rachel Skeates

The Kwa village was condemned, and the government offered the displaced people land here in April Valley, in the rolling hills above the city's east. It also promised to help them build new homes and restore basic utilities, such as water and power.

"In terms of the land, I am happy with what the government has done," said Michael Fa'abona, the chairman of the community. However, he said none of the other promises had come to fruition, and his people feel forgotten.

"Because we live as citizens of this country ... we see the government as our father," he said. "So I feel the government should recognise us and think of us and help us with the things they have already promised." 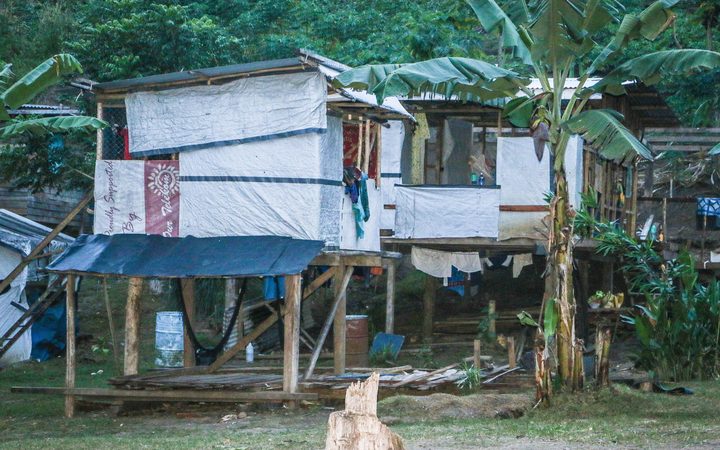 On a tour along the village's boggy footpaths, Mr Fa'abona said much of the community was still living in tents that had become weathered and torn. Those who had houses, he said, had built them themselves by cobbling together timber and roofing iron.

When the decision was made to relocate the approximately 100 villagers here, the Ministry of Lands promised that each family would be given - at no cost - land titles with 75 year leases. A "blessing from almighty God," the ministry said. But that blessing never came. 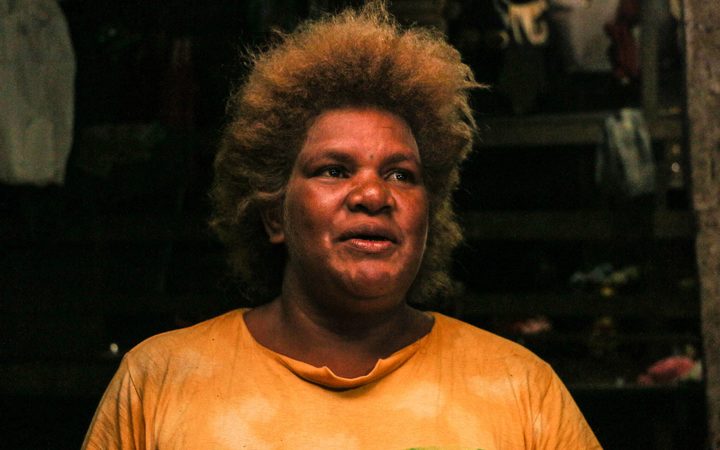 Brenda Ketea, a resident of April Valley in Solomon Islands. She said the residents were having to drink from a single dirty well. Photo: RNZ / Koroi Hawkins

"Our biggest problems are access to water and health clinics," said Brenda Ketea. "We use wells and it is quite hard work pulling up water and our wells are not that hygenic. [But] we use these to do our washing and we even drink and bathe from them as well."

Because of the dirty wells, some children had fallen severely ill or died. When they did get sick, the nearest medical clinic was miles away, and most of the journey could only be made on foot.

What happened in Honiara on 2 April, 2014, when the muddy torrent swept through Kwa village, is still a sensitive topic for the community and John Maelikiei, a youth leader, said many still had trouble coping.

"Some of us have lost our fathers ... some of the young ones running around are still children and don't have mothers," he said. "We see those children struggling and we worry for them - they have lost their help in the community and we look out for them." 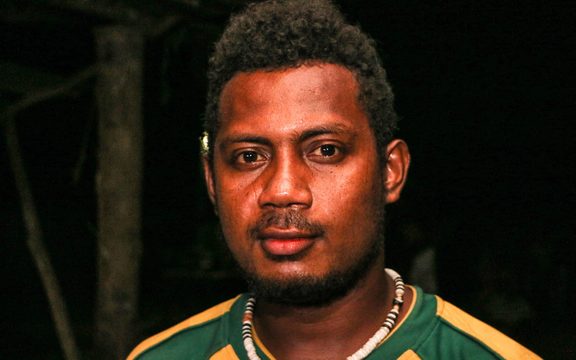 Many of the settlement's young people did not go to school, he said. The nearest one was miles away, and most parents could not afford to pay fees. Another young man, Kevin Ketoi, said many of the villagers had very low self-esteem.

"I think if we had something like joinery of something it would be best for us youths here to preoccupy ourselves with and making things and get some sort of an income," he said.

Above the village, at the peak of a hill overlooking the green, palm-fringed valley, the community had built a church from timber, plywood, tarpaulin and an iron rope, tied down by string.

They called it St John's, after their old church, whose solid brick-and-mortar stood no match for the river's fury. 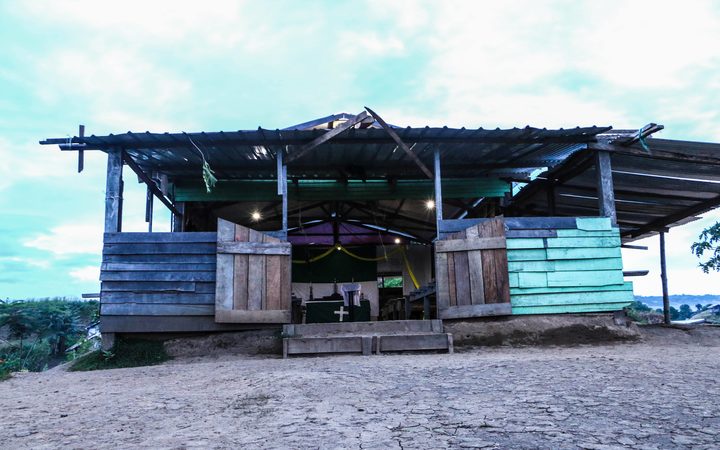 The church built by settlers in April Valley, Solomon Islands. They call it St Johns, after the church that was destroyed in the 2014 floods. Photo: RNZ / Koroi Hawkins

One man said the Archbishop of Melanesia had visited the site the weekend before for All Saints Day celebrations. When asked what the Archbishop had thought of their living conditions, the man laughed. He said he commented that it was a nice piece of land.

Beside the church sat a concrete monument the community had erected as a memorial, which sat beneath a tattered Solomon Islands flag that fluttered defiantly in the wind. Every year, on 3 April, the community gathered here to hold a memorial service.

"We always remember them ... That is why we made this monument," said Mr Fa'abona. "And we have hoisted the Solomon Islands' flag to show that this is the place that the government gave us victims." 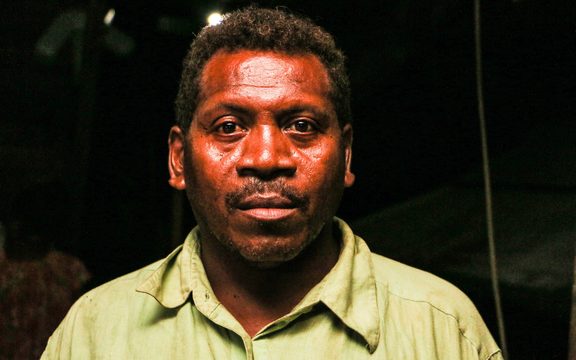 But apart from the land, the government had given this community little else.

The lands minister, Moses Garu, did not agree to an interview. But in brief comments outside parliament, he said he was aware of the problems faced by the people at April Valley and his ministry was still working on getting water and power to the settlement.

But he said other issues relating to land tenure were more complex, and authorities had encoutered issues including people who were not flood victims moving onto the allocated land.

Mr Garu said the ministry's permanent secretary, Stanley Waleanisia, would be the better person to speak to. Mr Waleanisia is yet to respond to requests for comment. 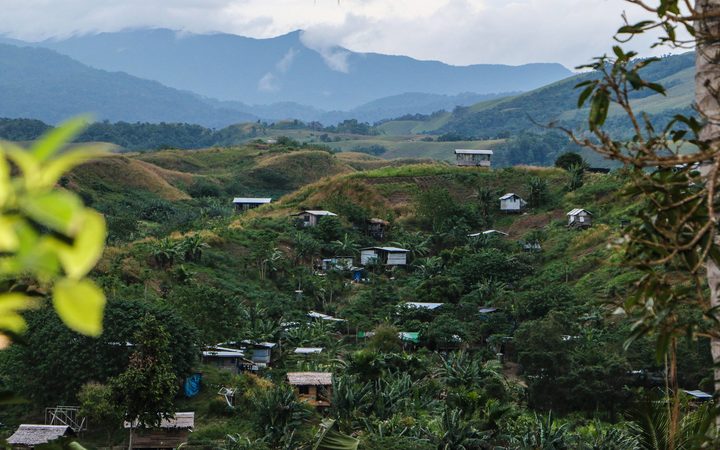