Amnesty International has called for the release of a youth activist who has been detained by police after a lone protest through Suva. 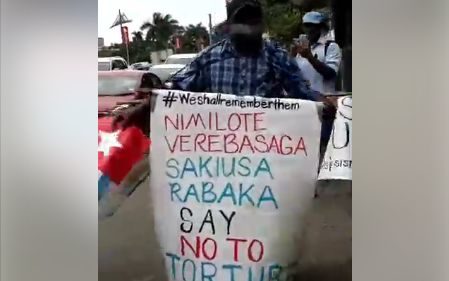 Jope Koroisavu makes a lone anti-torture protest on the pavements of Suva, marking UN Day in Support of Victims of Torture on 26 June 2017 Photo: Facebook

Mr Koroisavou spent the night in police custody and he is due to be questioned again this morning according to his lawyer Aman Ravindra-Singh.

Mr Ravindra-Singh says Mr Koroisavou has yet to be formally charged but questioning indicates he is likely to be charged with sedition.

He said Mr Koroisavou was holding a brave and dignified protest and he must be released immediately.

"Fiji's government prides itself on having ratified the UN Convention Against Torture, but it is has failed to bring legislation in line with international standards, revoke immunities for security forces, and clear away obstacles to accountability," said Mr Gomez.