A man has been detained by Fiji police after making a lone protest march to mark the UN Day in support of Victims of Torture. 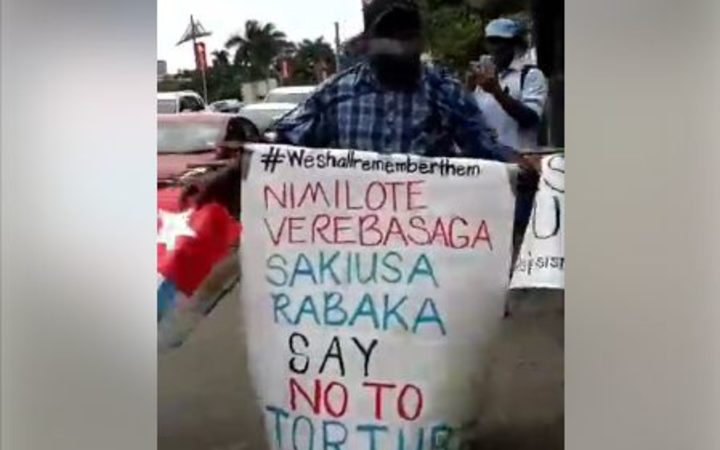 Jope Koroisavu makes a lone anti-torture protest on the pavements of Suva, marking UN Day in Support of Victims of Torture on 26 June 2017 Photo: Facebook

Jope Koroisavou was walking along the pavements of downtown Suva carrying banners with the names of men who have died in Fiji after alleged torture by the state.

The SODELPA youth wing leader was also carrying the Morning Star flag, used by supporters of West Papuan independence, which is banned in Indonesia's Papua region.

"Two guys came out of the 4x4 and took him. He was just crossing to cross and then the police came on the scene. He was alone. I thought it was really brave of him but ... plus today is a day of remembrance of all those who are tortured."

Viliame Waka said Mr Koroisavou was not disrupting traffic during his protest.

The youth leader is alleged to have breached the Public Order Act, according to FBC news.

Earlier Mr Koroisavou made a call on behalf of the SODELPA Youth Forum for laws to be enacted to protect victims of torture, listing the names of six men who have died after beatings in military or police custody since 2007.

In a statement released as he took to the streets he urged the government to implement Amnesty International's recommendations in its 2016 report "Beating Justice" and for security forces to uphold the rule of law.

"We are calling on Civil Society to be the voice of the dead and of those people who have been silenced," he said.

"Lastly, we are calling on the Government of the day to investigate and bring justice for all families who have lost their loved ones to brutality, torture or inhuman treatment."