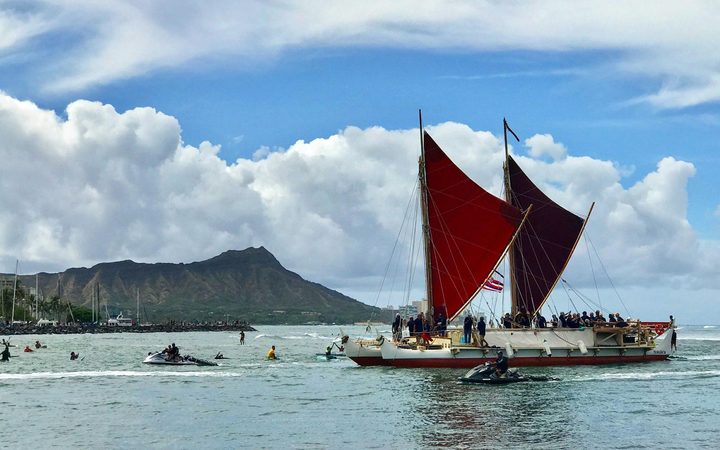 Thousands of people crowded into Ala Moana Beach Park on Saturday to watch the Hokule'a, a traditional Hawaiian canoe, make its return to Oahu after a three-year voyage that included visits to 150 ports in 27 countries.

After more than 40,000 nautical miles at sea, the Hokule'a was met just outside of the shores of Hawaii by a fleet of canoes from across the Pacific who led the Hokule'a to shore where the crew were greeted with flower leis (necklaces) and traditional Hawaiian chants. Hokule'a returns to the shores of Hawaii after a 3 year voyage. Photo: Office of Hawaiian Affairs

Mehana Hind knows family members who have been on board the Hōkūle'a.

"There have been about 250 crew members sailing the Hōkūle'a over the several years of travel," she said.

"It was so good that for the vaka's final leg from Tahiti to Hawaii, two female navigators were at the helm."

She said this voyage has really signalled the ushering in and passing on of knowledge from one generation to the next.

"We are really proud of the work that our va'akolua has done with many thousands of thousands of people who are inspired to look within and to care for their natural resources and to take care of those systems that are timeless," she said.

"Keeping our islands thriving, that is what we are most proud of and this is very significant for us and our little old islands in the middle of the Pacific ocean."

A spokesperson for Hawaii Tourism, Darragh Walshe, said there are many events planned over the next several days to celebrate the end of an important journey.

He said when the Hokule'a contingent visited New Zealand in 2014 as part of this trip the interest and engagement soared and this event will do the same.

"Over the last three years, the Hōkūle'a, as part of the worldwide voyage, has been spreading a number of messages around the world, particularly in terms of that navigation, the ecosystems and looking after the world and our environment. But in particular too, the sharing of the Hawaiian culture."

Tourists and locals have enjoyed spending time at Magic Island to meet crew members, getting on board the vaka, and eating traditional food as well as see the different cultural exhibitions on display in Honolulu. 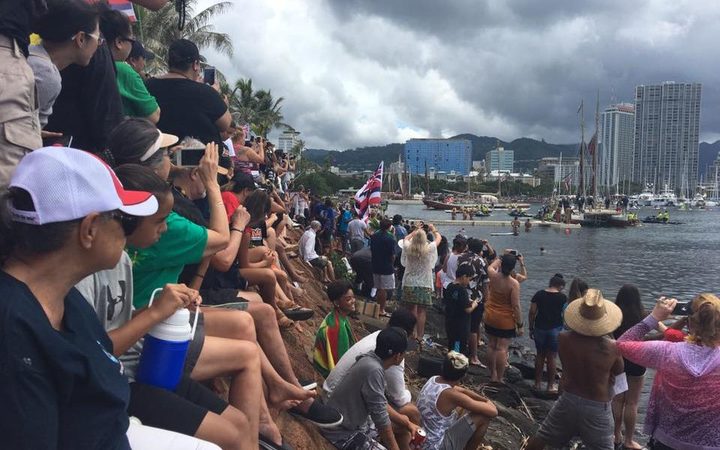 The Hōkūle'a's apprentice navigator Jenni Ishii said crews were made up of volunteers from all over the world.

"We had no idea what we would find and how the vaka's message about climate change, living more sustainably, would be received but we have met so many indigenous communites all over the world and seen what so many people are doing to look after their environment."

Jenni Ishii also works for the Polynesian Voyaging Society as an education coordinator and said there was a strong New Zealand connection.

"About every month or so a new crew would join and everyone is a volunteer and so we've had hundreds of people from all over the world and also a lot of crew members from Aotearoa and a lot of them are here this week because they have all been a part of this journey."

She said one word to describe the experience is family, because of all the connections shared and the bonds created working so closely in a small confined space.

"It's based on the micronesian system of navigation and it has worked so well for the last 42 years now and yeah so when we are sailing in the Pacific it is 100 percent no instruments but in some of those places like India and off the coast of Africa, we have had to rely on GPS along the coast."

She said one challenge they came across was climate change and all the forecasts changed once they left Pacific waters.

"You know once we left the Pacific, everything changed, and all the forecasts were changing with us. Because it was one of the hottest years with el nino and so that really changed our sail plan and it made us be aware that we can't just rely on the old data that this earth is changing and that it was really important to share that this world is changing and that we really have to pay attention now. "

The Hokule'a canoe has had much mileage since making its very first voyage back in 1976. 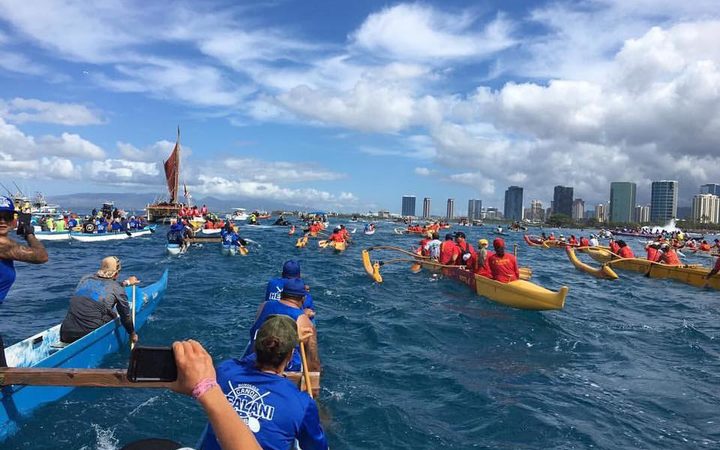 Hundreds of vessels escort the Hokule'a to port in Honolulu. Photo: Office of Hawaiian Affairs